Afternoon #WarHamFam and #WarhammerCommunity - I've been playing Middle Earth Strategy Battle Game again at Otty's. I don't know if it's clear from the pictures, but he is very much a fan of both the game and the setting. This is his Amon Hen board and he's been playing the scenario of Frodo and Aragorn escaping the Uruk Hai with anyone who'll give it a go. I hadn't played in a while so it was my turn, with Liam playing the Uruk Hai. 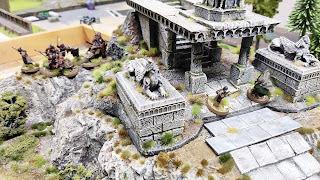 Aragorn has a special rule to March, adding 3" to your move and those of anyone else around him, so long as they end up within 6" of him. So, both he and Frodo made good pace down the path, Aragorn moving 9" and Frodo 7". 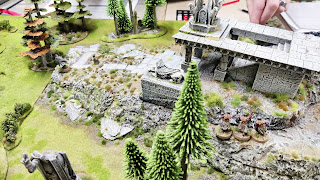 But the Uruk Hai were hot on their heels as almost all of Liam's orcs came on, but from the back of the board, behind the ruins [not ideal for him, but great for me]. Frodo had to negotiate the turn in the path, slowing him down. I could have jumped straight off the rock face but he could have been injured or equally stalled. 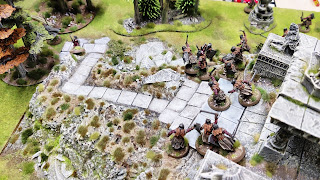 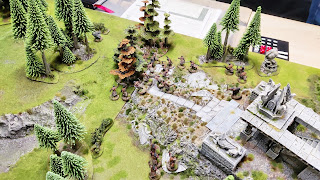 He was just about keeping up with Aragorn, but suddenly an orc appeared in the bushes attempting to slow them down. 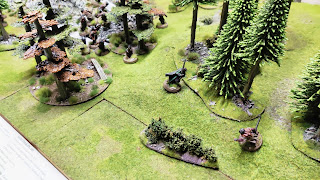 There was nothing for it, Frodo panicked and put on the ring, to avoid the orcs, who started to swarm where they thought he was. Aragorn had broken through, getting so close to the river edge and escape. 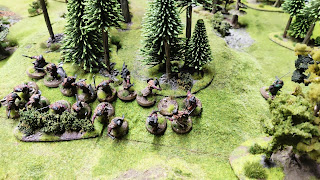 But he couldn't leave Frodo and waded back into the swarming melee to save him. 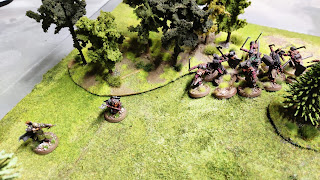 It was not meant to be and the weight of their foul numbers brought him to his knees. The Fellowship was broken, the King would not return - Middle Earth was lost to the forces of evil. Well, it's a good job there's a multiverse as if this is how the first film ended a billion dollars of revenue would have gone begging! A lot of fun though. 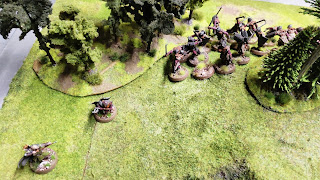 We followed this up with a quick game with our warbands. We've reset the campaign map, but still keeping our units as they were. I was playing against his elves I think. Unfortunately I only appear to have the one picture and can't seem to recall what happened. I know he had two archers in the cate tower, who were really annoying and my Warg had some fun climbing the battlements. 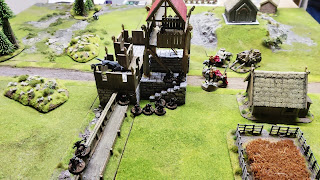 I did end up with some advancements for my Goblins, one has been promoted to a Blackshield, which Otty said he'd kindly make for me. More to come as this was a lot of fun to do again. It's weird because it doesn't matter too much whether I win or lose, the characters still advance and even their injuries can confer bonuses. The simplicity and rare re-rolls are also appealing as it makes it much easier to play and far more balanced and fulfilling than my recent 40k experiences. It feels particularly unfair of me to somehow still view this as a secondary choice than 40k. The reality is I'm having far more fun playing it.
Posted by 40kaddict at 12:00