Afternoon #warmongers and #warhammercommunity I've been #paintingwarhammer on my #Tyranid Warriors. Coming off the back of how tedious I was finding the bone I'm now onto the turquoise chitin plates. I did adopt an 'outlining approach though. This is where I do the outer edges - they're the easiest to do as you can quickly identify what needs to be painted. Then I'll do the inner ridges. 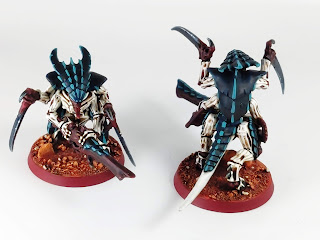 I then subdivide it again, similar to how a ruler breaks down centimetres, then half, then millimetres. With the striations getting a little smaller as you work your way in. It means they end up with a uniformity to their markings, which is slightly unnatural but I can live with having a system helping me through the process.

Having done all the outlines, the 'inlines' feel a little more manageable to do. Another chunk, was getting the tails done. Again this was a fairly simple part to paint so it didn't feel to much like a chore.

With each model having somewhat of a headstart it felt a lot easier to do the rest of the model. The head was surprisingly time consuming but the top carapace plates took the longest, because that's where there's more freedom in how the striations form.

The legs are also fiddly trying to get the top top plate which is usually hidden under a Deathspitter or weapon arm.

And lets not forget the front shoulder plates and any bits on their weapons. It's really weird how chunky these paint strokes have become. First highlight isn't so much of a problem, there'll be thinner marks inside these ones. But I look back at my Trygon and see finer paint strokes and I can't understand why. 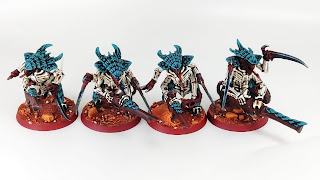 I don't know whether it's me and my cack-handed painting, the paint itself or my brushes. I have a very old sable brush that has quite a nice point to it but I'm not sure it holds its shape the more you paint with it. The same goes for a number of cheaper brushes.

It's a little frustrating. I'm also a little paranoid about my dots now. I love them, it was an inspired choice when I added them, originally to my first Trygon but first discussed on my kitbashed Tervigon. I think I shared a pic on Reddit once and had some guy claim the 'dot-thing' was a fashion trend, because the coconut crab theme had just surfaced and everyone was jumping on it. 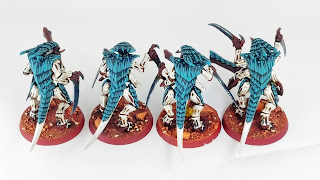 I tried to point out this wasn't that scheme [although sometimes I wish it was] and I'd been doing dots for years just to fill in empty space [mainly] on the carapace. They weren't having any of it though, apparently 'dots were a fad, that would eventually fall out of fashion and then I'd be stuck with this scheme'.

How they couldn't grasp that I'd never done it to be fashionable, so whether it was on trend or not was completely irrelevant. What was I going to do? Repaint my entire army [he says, repainting 9 Warriors... 😝]. And yet it still irks me that they planted that seed of doubt about something that I'm particularly proud I chose to do. However great this community is there are so many that suck big time. The world might be a better place if folk just remembered to follow Wheaton's Law. 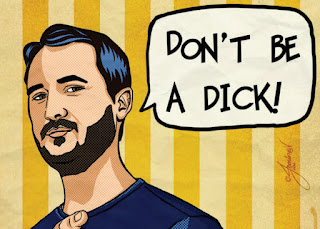