Afternoon #warmongers and #warhammercommunity I've been #paintingwarhammer on these #Oldhammer Tyranid Warriors, which I kitbashed into Tyranid Primes and painted 11 or 12 years ago. I'm probably going to set my OCD off now, chronologically I did the 2nd bone highlights on the Primes, after the Warriors [next blogpost] but for some reason I want to post these first. 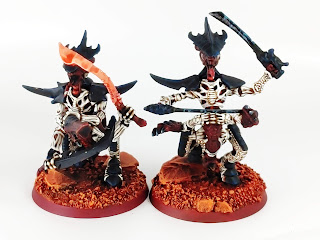 As you can see they are very pale, compared to what their original paint scheme was. You might just be able to see a subtle retention of that on the legs. I didn't go over the top with the second shading of strong tone, so they have more of a sepia tint lower down. 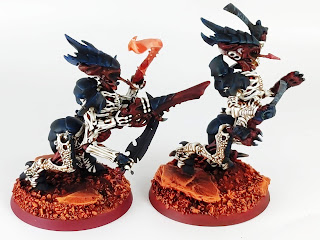 However, I probably do go over the top with the 2nd bone highlights, there's perhaps more of that shading and 1st highlight I could retain but I may get carried away. 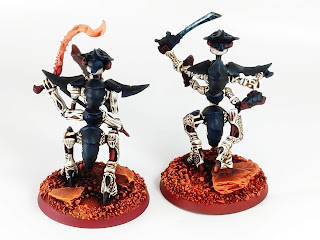 I don't know if they appear overly pale because the turquoise hasn't gone on. It presents as such a huge contrast with the dark blue. I'm comparing them to my most recent Warrior from last year and they appear no more pale, but the chitin does make him balanced a bit more. 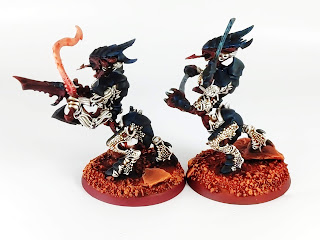 Anyway, I was lucky these two highlights, alongside a Warrior were completed in one painting session, That was a slight speed increase on the first highlights - less thinking as I'd already laid down the areas perhaps. Maybe if I'd done less highlights second time around I could have boxed them off even quicker? I'm pleased with what I've done, but yet again I query how much I'm obscuring with my final highlight being too much. It doesn't matter really, they're going to be a marked improvement from their original scheme.
Posted by 40kaddict at 12:00