Afternoon #warmongers and #warhammercommunity I've been #paintingwarhammer on my #Tyranid Warriors. These were highlighted over 3 and a bit painting sessions [evenings] this is becoming quite the undertaking now.

I've been keeping a record of my sessions, this is 9 sessions, not including build, prime, base, basecoat and washes. I'm definitely up to the task but the 9 Warriors and 2 Primes as a batch feels a little too much.

I think it drains too much motivation. It's like feathering the accelerator when you're driving - just enough gas to keep your momentum, rather than having to put your foot down and it drains your tank. 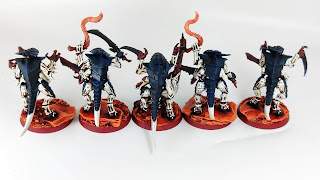 It's frustrating because I have bags of desire to get all of these projects done, I just can't progress quick enough so I can consistently tick things off. That frustration can make things feel overwhelming with so much still to do, which then makes me want to take a break.

Now, I know a lot of people advocate that if the hobby feels like work or a chore then it's not fun and you should stop doing it. Occasionally I agree, but also if I take a break I still have to come back to these at a later point and everything else has just been delayed that much more. 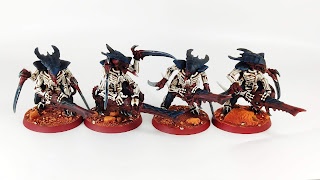 That said, with the bone complete it's turquoise next, then reds and blacks and finally all the details like teeth, eyes, random pink bits. Hopefully those won't be as time consuming as the bone and chitin as they take up less of the model.

Also, when I come to do the black highlights I'll be jumping back onto my Talonmaster to complete those bits too.

I just think it's handy to paint those things at the same time, just kicking myself I didn't get my Ravenwing Attack Bikes to that stage too, but then if I had all these Warriors would have been delayed to fit them in.

The funny thing is I actually have more time to paint at the moment, I'm just finding more things to do like playing Company of Heroes, after I finished Space Marine. That's one of the reasons I stopped computer games, because it wasn't that productive and then threw myself at the hobby. Now I'm using that distraction a way to not burn out, which is a help, but as explained, is also a hindrance. Nevermind, 'progress is progress'!
Posted by 40kaddict at 12:19