Afternoon #warmongers and #warhammercommunity I've been #paintingwarhammer on these #Oldhammer Tyranid Warriors, which I kitbashed into Tyranid Primes and painted 11 or 12 years ago. 2nd chitin highlights is always a milestone, even if I do chitin first and bone afterwards. 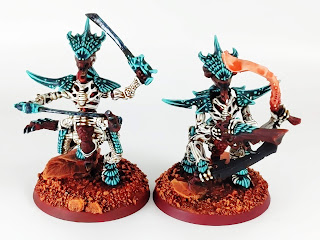 But in this case, chitin second, then there isn't so much to do, probably 25-30% of the model left. That's still a lot, but that's only because some of the details can be time consuming even if they don't represent the bulk of the model. 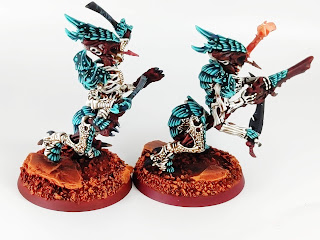 The reds are not a standard recipe, I wing it each time, which is why things are varied but at least these will all be similar. Black claws and talons will take a while too, because it's black, obviously. But I think my 4 original Warriors I can salvage their blacks, they'll only need tidying up and gloss varnish again. 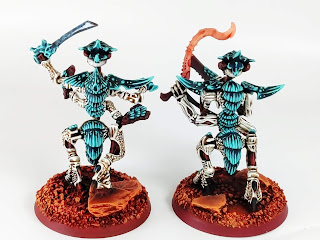 The highlights on the black might be a little different because of it, but it's such a small part of the model I don't think it'll be too noticeable. 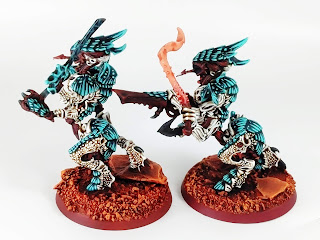 Still to add all the veins to the Lashwhips as well, that should be fun, a little experimentation on my nids for a change...
Posted by 40kaddict at 12:00