Afternoon #warmongers and #warhammercommunity I've been #paintingwarhammer on these #Oldhammer Tyranid Warriors, which I kitbashed into Tyranids and painted 11 or 12 years ago now. I saw someone making fun of these sculpts the other day, comparing them to the new[er] models. Sure the current warriors are streamlined and have a consistent theme with the rest of the Tyranid range but these are really tall and menacing. They tower over the current models, which is why I thought they were so apt for Primes [when there was none]. 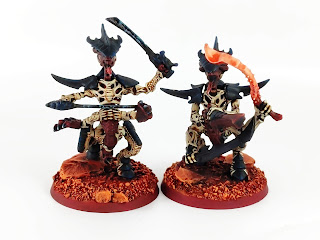 Additionally, that rib cage tho! I can't think of any current model that utilises that hollow, layered effect. I think we've lost that ingenuity and creativity because you can cast in more detail now. That kind of layering of pieces seems to have been forgotten about, which is a shame. 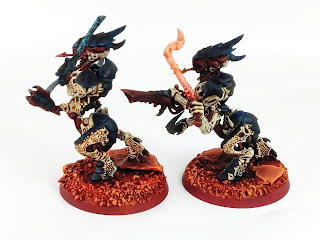 OK, their waistline and neck is a little anaemic, thanks to their insect-like head/thorax/abdomen design. But the head crest helps them look part of the current line up at least. 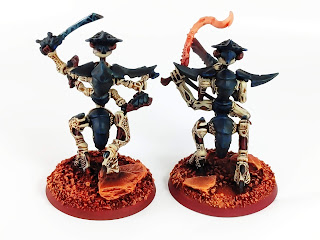 They're a devil to paint though, as I tried to individually pick out all the texture on the legs. Again, that texture has been lost on the current range. In some respects the smoothness looks cool, but quite often you will see artwork, where that non-chitin, non-fleshy area has lots of texture. 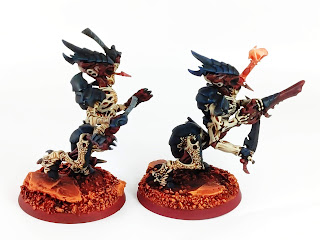 Just look at the work of Helge C. Balzer and his renditions of Tyranids. Now that is the level of alien horror we should be seeing. Fibres, threads, textures, slime and all sorts of bio-material emanating from these creatures. 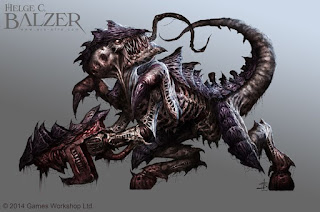 I appreciate that might be challenging to injection mould, but we've evidently had texture in the past. Of course the design language for Tyranids is pretty set now, so we're unlikely to get more detail. Thankfully it's easy enough to simulate the effect of texture with paint, which I'll be doing with the next set of highlights. It took me 5 sessions to get these and the 9 Warriors done, fingers crossed bone 2 highlights aren't so time-consuming. I don't know why but I'm really looking forward to the turquoise...
Posted by 40kaddict at 12:17