Afternoon #warmongers and #warhammercommunity it's the 'second' of #Dreadtober and I'm continuing my #Imperial Knights Armiger Helverins. I primed these - red oxide for the armour plates and I got two cans of Simoniz Matt black for the metals, but neither of them have had particular great coverage. The Red Oxide appears to be trying to behave like Contrast paint and the matt black appears to scratch off quite easily. I've pressed on regardless. Vermilion sponged on both and then one had Gamboge, as it will be full chevron. 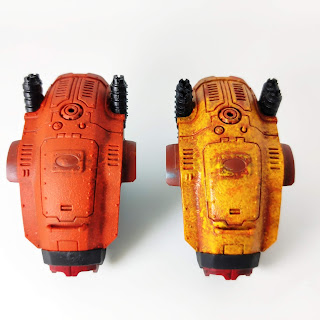 I have 3 tubes of my signature Home & Bargain Vermilion Art Acrylic left. I couldn't find the opened ones so went to one of the newest. Bizarrely it is no longer the consistency of wet toothpaste and more like cream cheese. I tried mixing it with a big bottle of Vermilion I got from the Works, which is slightly thinner. I has the texture I'm after but did come out matt. There will be teething issues as I slowly transition from the H&B stuff so it's worth noting. Also, the red Helverin does have it's smoke stacks switched so they're angled backwards, rather than vertically. It required a small trim of the pipes and some greenstuff to fit them around the arm mounts but it was just a test to see if it was possible. 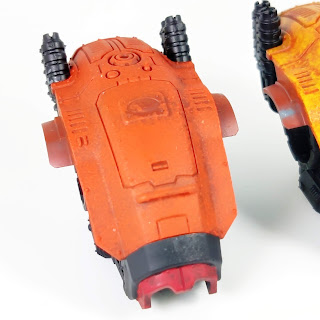 Gamboge stippled on. I can pencil in the chevrons next to do the black lines and then already start highlighting the yellow! 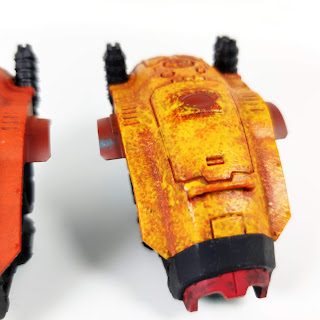 All the armour plates are still attacked to sprue so they're less fiddly to paint. I recall I glued them onto the model quite early on my Warglaives but I'll see how things go this way. I think I need some more sponging for the texture and all the metallic edges will be challenging, 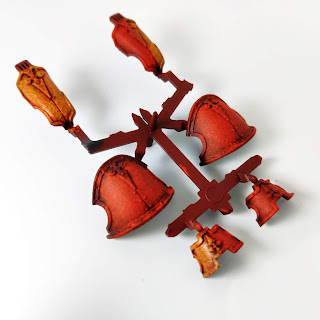 This feels like I've made huge progress, in reality I'm probably not even 20% done. I've made more choices at adding the yellow and black chevrons on. I think that will help differentiate the units a bit more and give them more of an identity. 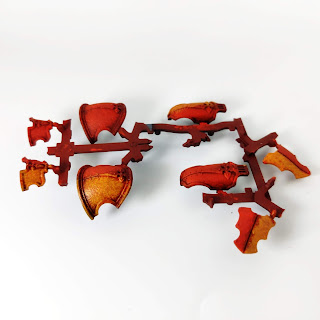 The guns are also getting up to speed and the shoulder joints too, but I haven't taken pics yet. Rough Iron metallics next and maybe add some highlight to the reds. I think I need to go back to my Warglaives to remind myself of the process... just for peace of mind.
Posted by 40kaddict at 12:00