Afternoon #warmongers and #warhammercommunity it's the 'third' of #Dreadtober and I'm continuing my #Imperial Knights Armiger Helverins. I'm painting chevrons! I used a trusty wooden coffee stirrer to achieve this - cutting a 45 degree angle at one end, pencilling in a centre line and then placing the stirrer against it so I could rule either side of it and create each stripe. It's fiddly because it doesn't conform to the undulations in the surface but you have to make allowances. You may notice that the second from bottom yellow stripe is a bit chunkier than the rest. Yes, that was not planned. However, the House Raven full crest will go there so - happy accident it will help it fit and I can claim it WAS planned that way! 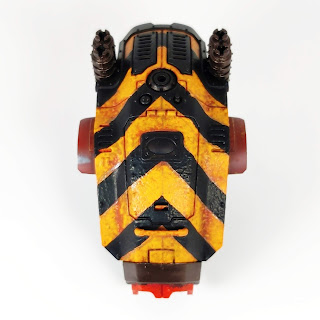 You may [or may not] note that these differ from standard house Raven chevrons in that they point backwards. The Official House Raven chevrons point forwards. As this is an off shoot of Raven - House Corvus, that explains it and I won't be doing the white edges of the black lines either. 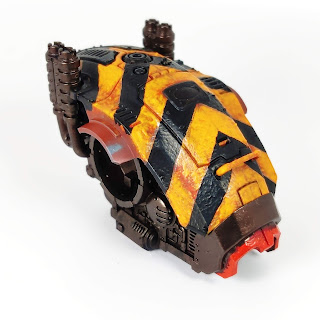 I thought a chevron collar would be interesting on this one. Now I've done it I'm not entirely sure it works but I'll persevere with it because the quality is there, even if I'm not convinced of the result. 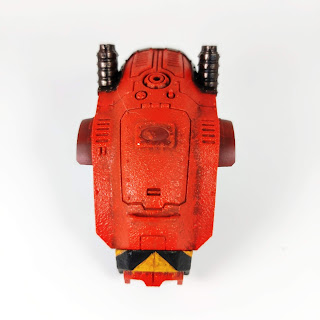 Let me know what you think, if it looks odd or not. 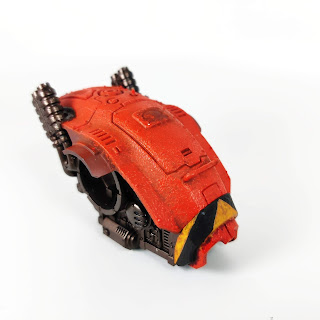 I also did all the armour plates and made some random decisions about which side chevrons would be on and I'll try and find a logic for them when I commit to attaching them to the models. 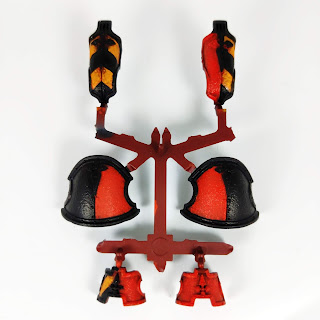 I'll be doing the Rough Iron banding next on all the edges and the remainder of the metal work. 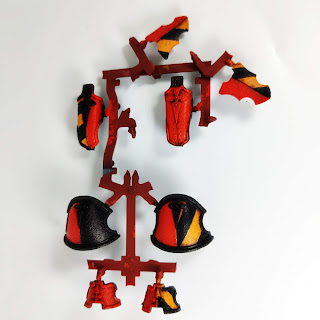 The Autocannons also got base coated, the chevrons aren't too great but I hope to tidy them up and hide the discrepancies with highlights and ultimately weathering. 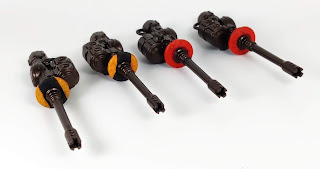 Round about this time with the Warglaives I think I really struggled trying to get my head round what order to do things in. With so much stippling and dry brushing involved, both in the red and brassy bronze which comes first? I had started to feel the same sensation as I progressed and so went back to those original posts but they weren't too revealing [typical!]. So I figured that with this stage its the metals, because every mistake and overspill of paint that goes on the red or yellow can easily be covered up with battle damage later. Of course I could catch red on the metal wehn I do but I think it will be a lot more controlled for those areas than the metal work, despite some of that banding being very fine detail. So, VGC Hammered Copper next [my slightly redder Balthasar Gold equivalent].
Posted by 40kaddict at 12:09