Otty's Man Cave - what lies within?!

Afternoon #warmongers and #warhammercommunity they last time I got to visit Otty and his shed of delights I thought I'd actually take some pics of his setup and what treasure lie within. Here's the main gaming table, underneath is loads of shelf storage for additional faming tiles and road strips to go inbetween. It was actually so heavy it bent the original castors he put on it! 😂
The back wall shelving units are mostly terrain, for all the different games systems and boards. So, alongside his Middle Earth scenery he's got stuff for Bolt Action [both European winter and Pacific theatres of war], Star Wars Legions and various 40k terrain for both his winter Realm of Battle board and scenery that'll fit with these green flocked boards. It's also worth noting he has some small shelves attached to the roof beams, so as you're playing you can look up and see boxes of Chaos Warriors and Tyranids stuffed into the ceiling spaces! 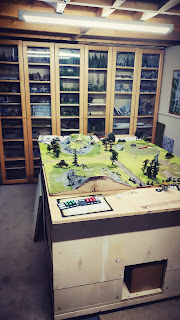 On the left had side a several rows of glass cabinets, here's the bulk of his Hive Fleet Gorgon Tyranids. 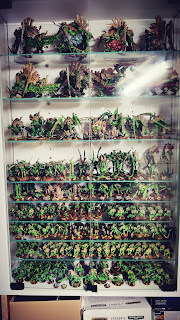 I thin the top left is a Tyranid bio-ship for Battlefleet Gothic, the rest of the top 4 shelves is Bolt Action. Then 3 shelves of #oldhammer Warhammer Fantasy Orcs and the bottom 2 shelves is his 40k Inquisitor force. 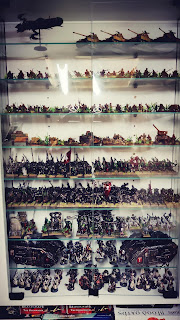 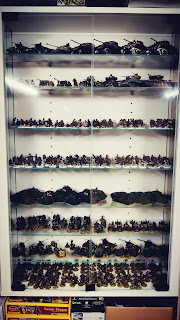 This is all Middle Earth Orcs, on square bases. 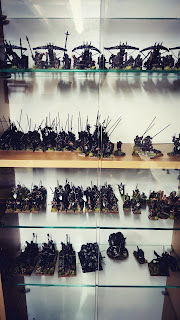 Top 2 shelves are Star Wars Legions, then the rest is Middle Earth - Orcs, Uruk Hai and various bad humans. I mean close up these are fantastic. All the colours are simple 3 colour highlights, the cloaks and clothing will quite broad brush strokes, that are so effective at distance. Yet there a nicks and scratches on the armour and all the White Hand of Saruman badges are so finely detailed, it's amazing to look at. He's incredibly skilled at how to get the best out of a simple paint job and where to invest time in the fine details that will elevate the rest of the model. 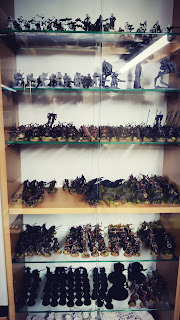 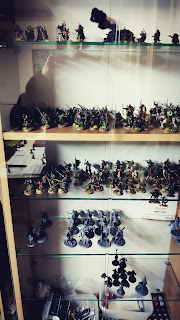 Moar Rohirrim. Their shield badges are absolutely stunning, although I appreciate you probably can't see them in this pic, but look closely in some of the future battle reports 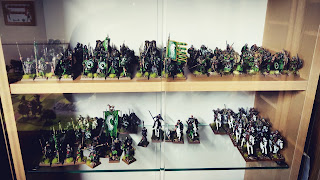 And a close up of his Stormtroopers from Star Wars Legions. 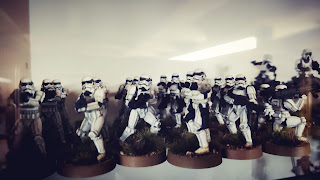