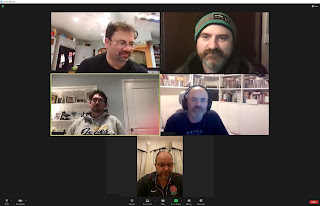 Afternoon #warmongers and I've not been especially productive on the old painting front. However, part of my To Do List was to 'play more games' -  a difficult task under lockdown. Luckily Ben came to the rescue, and after some aborted suggestions that we could play Blackstone Fortress online he created a Middle Earth Role-Playing campaign for us to play over Zoom. Back in the day we evolved our gaming over time. We played 40k, Blood Bowl, Talisman, Space-Hulk, Fantasy, Epic, pretty much everything GW brought out and then we got into role-playing. We had Warhammer Fantasy characters and a couple of game systems, I forget their names now. We then ended up live role-playing and some of the other guys went on to do re-enactments, black powder stuff and everything!
Anyway, we've been playing MERP for a few months now, with a session once a week or so. It has been the most fun I've had gaming in a very long time. My cheeks are regularly in pain as I've been grinning so much. It's been hilarious as our merry band of adventurers stumble around alternating between shockingly bad dice rolls and at least one 100 a session!
I sometimes have to remind myself to actually role-play though as a lot of time I just enjoy watching the other guys make stuff up and micro-manage how best to protect our loot 😂 That's the problem when you've role-played a bit, you become paranoid at every turn there will be traps, ambushes or thieves! Still we've found a load of money in a big pile of bear-dung and we've also met Gandalf - we're kind of a big deal now 😉
So, although my painting hobby may not have progressed too much right now, I am happy with where I am and these gaming sessions are doing wonders for my well-being. I don't know if you're in a situation to set up a game like this, but if you're missing gaming why not look at role-playing until things improve?
Posted by 40kaddict at 12:00