Afternoon #warmongers and #warhammercommunity I've been #paintingwarhammer Tyranid Tyrannofex for #DreadTober week 3. I'm a little behind on my posting schedule, apologies. I've obviously progressed significantly since these pics. In fact I am almost complete. Unfortunately I ran out of varnish, had some on order, it was supposed to arrive on Thursday but is still out for delivery :( 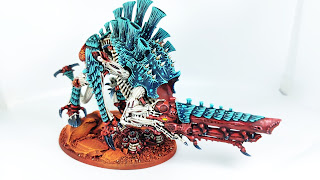 But I had made an effort to add some highlights to the red on the Rupture Cannon. 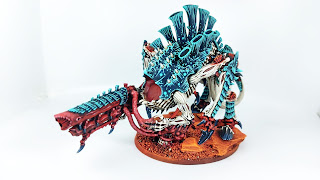 Which allowed me to create a fleshy texture on the feeder tubes that make it look potentially semi-transparent. 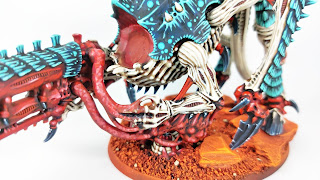 However, it made the pure vermilion highlights on the rest of the model a little incongruous. I've since added a little more highlights to them, not up to the white I used in places on the guns but just enough to match. 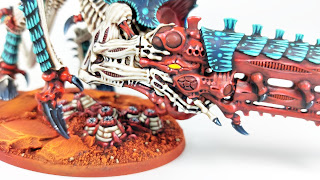 The fact is there is different fleshy red materials and different levels of specularity to them, that's OK. The problem is your mind tellign you they are the same material and therefore they should be highlighted to the same process. 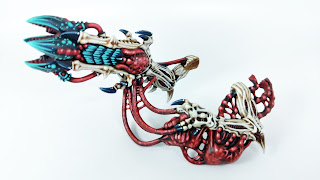 But I made one concession to additional highlights, I don't need it distract any further from the big gun at the front. The Acid Spray needs to be varnished, Tamiya Clear Red X-27 the inner barrels before I can then add the acid green highlights [a process I failed to record the last time I did it]. 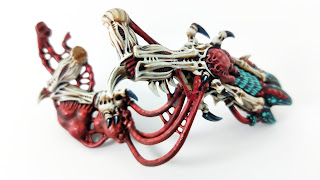 And I spent an evening doing the green glow FX. 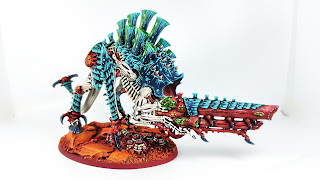 I had thought about the red glow but went with green in the end. 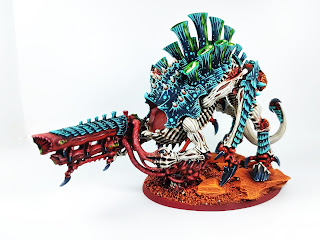 Still might need some additional lime painted in for the glow to be more effective but I was quite pleased how well it went otherwise. 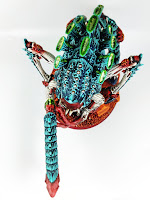 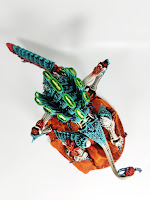 Here it is opposite the 'Great Maw'. As you can see that extra lime green will help the top of those vents match up better. Some subtle difference between the two and different colourations. But, not everything has to match, it would be amazing if they did but these aren't one continuous sitting in a painting commission, it's a decade of painting and they're different creatures anyway so can have different tones. 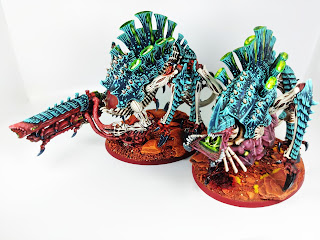 The glow FX worked out really, well, although the lower 5 spotted element isn't as good as the 3 bulbs at the top. 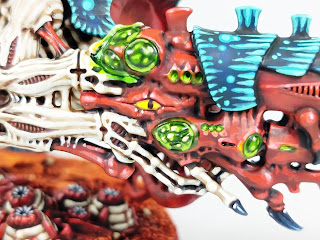 I also added some red around the Stinger Salvo, so it looked like they were being expelled from raw flesh inside. 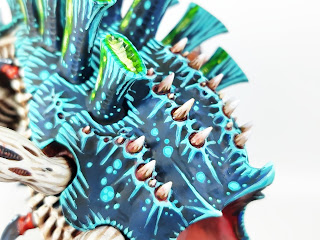 And some minor green glows on the inside help break up the red. 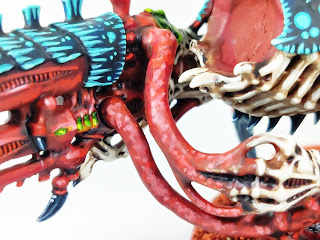 So from incredibly worried I wouldn't finish to almost done. Then I didn't get the varnish and effectively missed the deadline. I'll have another update this week hopefully, or TO DONE! pics maybe next week. Pleased with the results though.
Posted by 40kaddict at 12:21