The 2018/19 Hobby Season draws to a close, and how did I do? Well, obviously events happened in October 2018 that meant the hobby wasn't high on my list of priorities. One could say that it forced me to focus more on real-life but that really wasn't what I was expecting from the first task of a healthier hobby/life balance:


Develop a more healthy hobby/life balance - go to bed at a decent hour[ish], keeping a record might help [although tried it already for 2 months and it didn't]...

I don't think I managed that, I had some small breakthroughs in my attitude but I need to be better at getting enough sleep. Secondly I was supposed to play more games, I'm not sure that was achieved either. In my defence it was not just my real-world issues to deal with, it's been a challenge recently for all my mates. We need toplay more but I'm not going to feel guilty about it under the circumstances.


Find time to play some games, not just tournament play...

Now to my actual hobby goals - I managed to complete 5 out of the 16 realistic items on my list [plus an additional Underworlds warband]. But as I said when I went on blog hiaitus in October what I achieved this year was unimportant in the grand scheme of things. Here's what I did manage despite everything.


First up was Shadespire Underworlds Steelheart's Champions I [loosely] followed Rob Paints Models guide for these and despite the instructions I actually felt a sense of freedom because I didn't have to make too many choices. This meant I could just paint without being crippled by indecision. 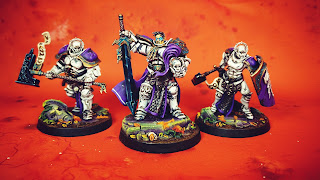 Secondly, the House Corvus [of House Raven] Imperial Knight Twins - Ser Ellenbogen and Lady Pettorini, named after Oscar's brain surgeons. This was a slog and given how the hobby was just not even on my radar at the time the fact I came along and finished them was enough for this season for me. Priorities change and my To Do list is always inspirational/aspirational, there are other things more important but these two were a fitting tribute when I could finally paint again. Bottom line, if my hobby season had have been just these two I'd have been content. 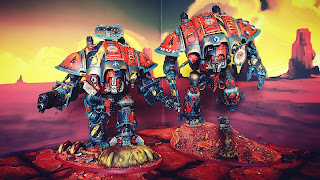 Shortly after the Knights I cracked on with my Shadespire Underworlds Garrek's Reavers. I didn't follow anything but my own vision of red-skinned worshippers of Khorne. It prompted some other colour choice issues but I got there in the end and they all have their little touches that surprise me in how I achieved what I did. 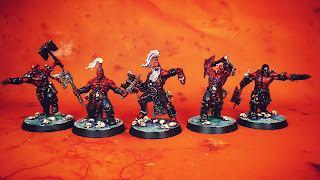 Sanctum Imperialis was next on my list. Challenging is an understatement. The extreme verdigris was a choice I still haven't reconciled. More bronze would have definitely been the safer choice than full on turquoise/green but it is what it is and they got done. When you look around things look odd sometimes but I cannot fault the quality of my funny looking buildings. 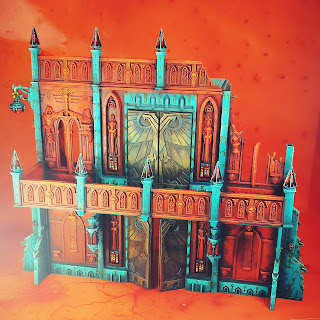 Y'lthari's Guardians followed but it was not without a lack of mojo around my other projects. I had been struggling to paint my Dark Shroud and despite holding off getting these for months I could take it no longer. What I achieved is potentially the best models I've ever painted since returning to the hobby. There are numerous compromises and issues throughout but I definitely can see an improvement and evolution of my own painting style. More importantly they did kickstart my mojo sufficient to face my Dark Shroud. 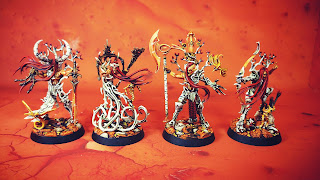 With some extra hobby time at my disposal I cracked on with the Dark Shroud. With that concerted effort it was much easier to overcome the perceived issues than I'd been worried about. Once again there are compromises, but far fewer than could have been. I'm just glad it's done and sits handsomely alongside the rest of my Ravenwing. 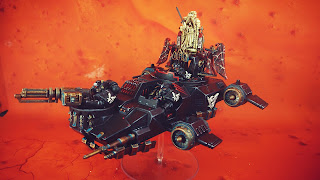 Size isn't everything... and although the tally for this season is nothing compared to the last [about one third] the results speak for themselves. I've painted some figures I'm really proud of, some massive projects alongside those that have been on my books for a couple of years or more. On top of that I painted terrain - you can't put a price on that! I've battled severe lack of mojo as well a refusal to even engage with the hobby for my own health but despite that I still created, blogged and gamed [occasionally].

This next season will be similarly challenging but I've a lot of stuff built, primed and ready to go, check out my Big Build efforts below to see what might feature in 2019/20...

The Big Build is my scaled down expectations to build miniatures. Building isn't always my favourite thing but without a construction phase I can't have a painting phase. I think I did OK on this years Big Build, mainly due to using it to avoid painting, but whatever gets results. It's not like I have done tons but a healthy crop of models built [and then painted] as well as some that were then prepped and ready for the future. Ironically it feels a little stressful with these ready to go - now I have too many options! I'll cope with it though.

I managed to finish building both Knights [although I don't seem to have a BW pic of Lady Pettorini post build :( ] My Imperial Knights were last year's Dreadtober effort, with my hope to finish building them both but due to Oscar's illness I couldn't face the hobby for a good couple of weeks, which was roughly the time it took in November [after Dreadtober finished] to get them 'built'. 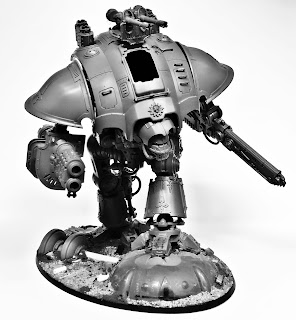 This TT Combat MDF building was a Christmas gift I hadn't had chance to tackle but I managed to get in some lunch-time hobby at work. A week or so gave me plenty of time to add extra bits of detail even if I was filthy with laser cut carbon soot after every session! 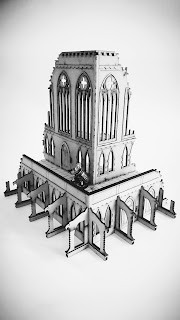 I won the Tooth and Claw boxset at Double Trouble in June 2018, so it was about time I built some of it. At this stage the Aberrants had been built, but not based, as I wanted them on the same resin bases from www.bases4war.com as my other Cultists. So the Redemptor Dreadnought took a sneak lead in the queue, getting glued to his base and some slate before the mutant stealers.

Tyranid Warrior to Hive Guard Conversion. It comes to something when I'm avoiding my Ravewning 'must paints' by actually building these! 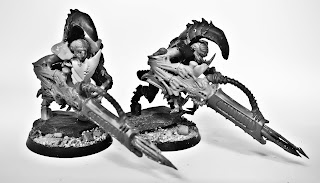 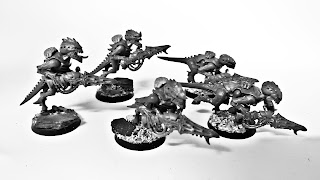 Genestealer Aberrants finally got based but I went with a different style of base than I'd originally planned. 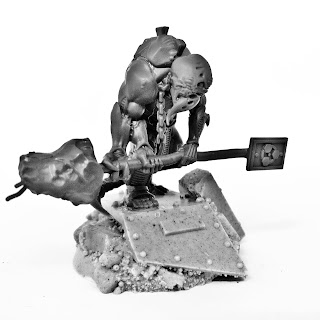 The bases were off ebay and were a little more decorative, which I think these models deserve. 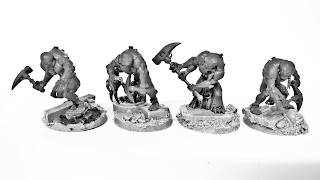 Tyranid Rippers were my next build, sometimes avoiding my actual painting tasks is a handy way to get other projects built, primed and ready. Hopefully getting them done now in the good weather will give me plenty to work on over the coming months and the dark and miserable winter. 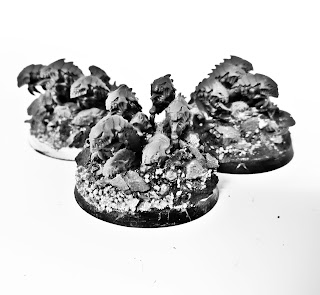 As a fug of demotivation enveloped me I did the only thing I could and bought more toys. As I said about the Chosen Axes it's almost rude to include these as they are so easy to build but actually there was probably an hours worth of faffing to get these built so Ylthari's Guardians joined the 'Bog' Build list [pun not intended but retrospectively spotting the spelling mistake I'll own it as intentional ;) ]. 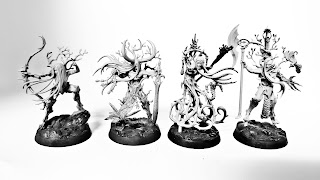