I followed up the Incubi Darkness with Grim Reaper, but forgot to photograph just that stage. I then added a pale blue craft acrylic fine highlight. It's not a particularly opaque paint which I think helps thin it. 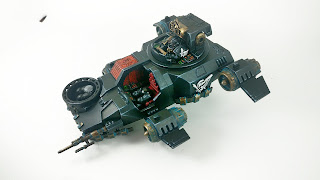 All the Ravenwing badges were highlighted too up to their final white. Its a very odd model to paint in sections. I have the Speeder, the gunner [who snapped off his legs], the driver, the 'DJ booth' the 2 magnetised guns, the 2 Plasma Battery's and the Shroud Icon emitter. It's quite and eclectic mix, different sizes, different requirements. But the black is mostly done, just some tidy ups to do. 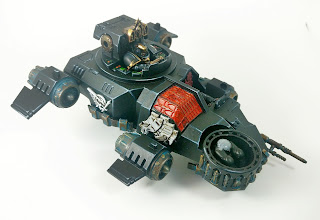 I threw on some green for dials and displays. It's a slight departure and a little 'disco' but what the hell. I also spotted I hadn't finished some more of the bronze elements so added a little more highlights. I've another highlight to add, a sepia wash to age it and then verdigris for patina. I did get carried away and started the orange glow FX on the Plasma Battery, not having done the verdigris, so I'll have to get all these elements on the same page as it's getting a bit unbalanced at the moment. 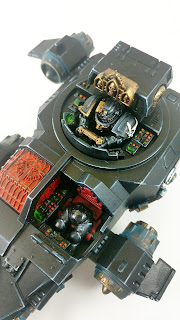 Still, progress and I have been playing around with my home-made wet palette. It works OK. I had realised I don't do a significant amount of blending so there isn't a huge need for it. Its main benefit is keeping paint 'alive'. Paint I put down the night before is still usable then next evening. However, you can see I need to keep the palette level, else it all spills off the paper and into the sponge bath underneath! 😝 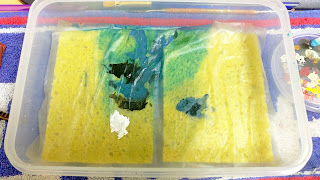 Getting there now. Once I get all the metals complete and the glow FX it's practically done. All the time I struggled with this I knew most of the hard work had been done. This is definitely an example of mind over matter, only the mind had convinced me this was a problem model but I had said to myself a few times it really wasn't. I'm sure it'll be done in just a few more sessions...