For a variety of reasons I got to visit my mate Liam the other day. He lives in Chorley, about 40 minutes away from where I live but when I get the train into work the station is roughly half way there so it makes sense for me to go to him. Invariably it mean he makes my tea, which is always nice but we don't catch up as often as we should. However, the request for a spare Thunderstrike Gauntlet from my Renegades box gave us the opportunity to actually have a crack at the game. The mission we rolled required us to critically damage 4 areas on the legs. Liam used his Khorne Knight, it has two fists but we played it with a fist and a Reaper Chainsword. Whereas I had Euronymous with the Thermal Cannon, Chainsword and we both had Heavy Stubbers

We started the game well apart but it was evident that he would have to come to me, although with my short range I'd have to be very careful not to get too close so I could take advantage of the range from the Thermal Cannon.

By the end of the first turn Liam had managed to get past the Shrine of the Aquila. I think I'd been lucky with a Stubber shot, it had missed its legs but hit the Gauntlet and taken a wound. 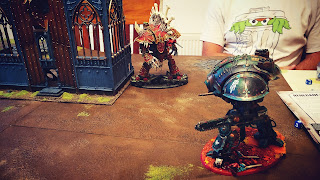 Next turn and I gambled instead of moving to Snap Fire and Standard fire. I thought two rounds of shooting, even one wildly inaccurate, might be better than him chasing me round the table. The Snap Fire did some damage but the Standard Fire missed completely 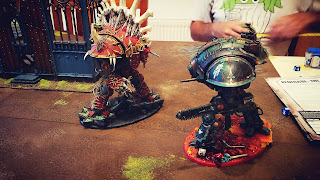 I had tried to get out of base contact range but then found out that in Renegade all melee weapons have a range. The Chainsword is 6" and the Gauntlet 4" so he was able to smash one hip to pieces - they autohit and do 3 damage. He then took another leg hard point to all but 1 wound left. 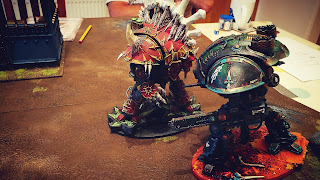 It was clear I was trapped now, with the damage I'd already sustained my movement was done by 1". All I could do was snap shot and standard shot again. I managed even the score about, Liam's Knight was on roughly the same sort of damage. I'd wiped out leg plate with the Thermal Cannon and mostly damaged another leg. I'd also put another wound on his gauntlet. 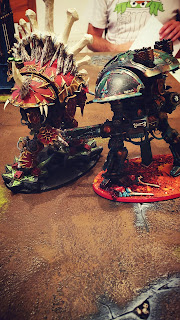 But there was nothing I could do as the Gauntlet and Chainsword autohit again. 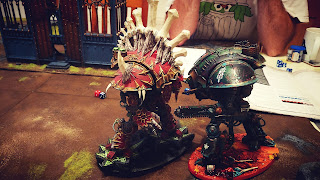 Taking my legs out from under me. 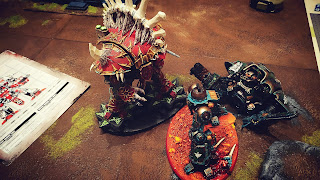 Khorne had prevailed, Eurnoymous truly was a fallen knight!

As the game had been relatively quick we had a nother go, this time I took Liam's loyalist House Terryn Gallant and he took the Nurgle Paladin. We were playing a mission where I just had to escape the top of the board, it was Liam's job to stop me. 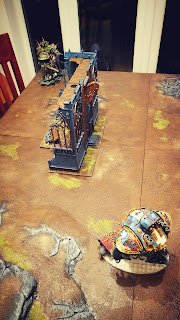 I moved into cover of the Shrine and rotated my Ion Shield for a better save.

Unfortunately the Fecund of Filth couldn't hit the side of a barn, let alone Sir Diddymous of House Terryn.

Next turn I moved further out, again rotating Ion Shields

The Nurgle Knight moved to cover my escape but it was running out of space. 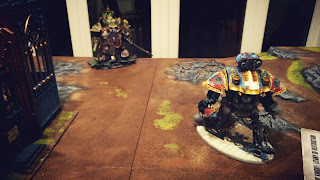 Sire Diddymous pondered whether to fulfill the mission. 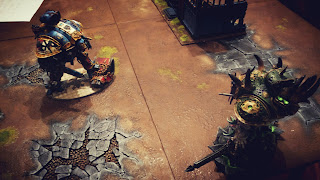 He could not stomach the though of this monstrosity left.

So he charged. A smash to the face destroyed the head and rendered the demon engine dumbstruck, reducing it's options in the following turns 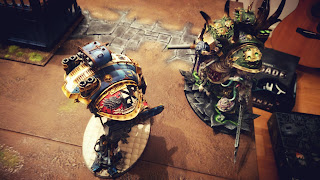 A subsequent swipe removed its Reaper Broadsword, leaving it with no melee weapons whatsoever.. it was clear at this point there was no stopping Sir Diddymous, he had all the advantages, could escape at his leisure and he was toying with the Renegade, we called it for the Imperium. 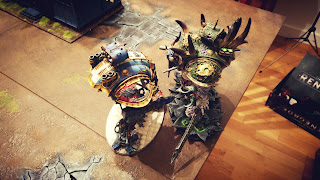 I'm not sur emany people buy Imperial Kights Renegade for the game and so it's flaws perhaps aren't too much of a worry. It's clear shooting is far from effective, more accurately melee is too effective. The auto-hit is just too powerful and there is no stopping those weapons as they're AP just cuts through a 5+ armour save.

Also the combined critical damage could do with broadening. Only the weapons are destroyed after two hardpoints are critical, it'd be nice for legs to be crippled more/risk toppling over like the old Adeptus Titanicus rules. We may develop some house rules for this, see if it's possible for multiple Knights and create rules for the Warglaives... Still as a quick game goes it's fine, I just think there's more potential in it to make it more compelling and it's clear if you go melee you will win the game.
Posted by 40kaddict at 12:16