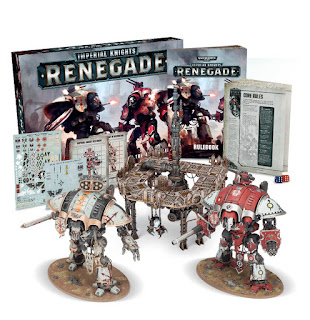 This month the staff recognition scheme thought our team deserved the reward. Previously I hadn't engaged with the process as it's built on staff recognising each others efforts which smacks of 'fishing for likes' and having an employee of the month based on that can be open for abuse. I'd much prefer the powers that be were directly aware of what we do instead of crowd sourcing nominations so they can remain arms-length.

However, I know what all our team members nationwide did last month and as there's 20+ of us that means the reward is shared between us and isn't one person pocketing the lot. It's a far more equitable recognition than I'd previously observed.

The key fact is that the reward can be taken in Amazon vouchers which means when I add it to the birthday and Christmas gifts already accrued I could blow it all on the Renegade box set, because who doesn't want another two Imperial Knights - they're all the rage! Not to mention the terrain too...

It does mean my grey tide has suddenly become somewhat of a tsunami again and will require a re-think of next season's To Do List but that's the hobby right? So, when someone asks what price your principles?, you know my answer is "screw principles Heretic - for the Emperor!"
Posted by 40kaddict at 12:25