I'm cracking on with this beast now, made just a little bit tougher by the silly heatwave. On the plus side I added a new fly-screen to my window in the shed so I can have it open at night and not be swamped by flying bugs [wanting to meet their Hive Queen no doubt!]. Unfortunately it can still be 26°C in the evening, mainly because it's topping out 32°C during the day. That temp is really uncomfortable and the paint is drying on the palette. I'm sure Marcellis has no sympathy for me ;) 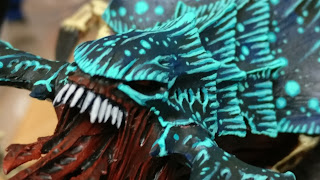 Anyway, the highlighting continues and I have finished the legs. What is pleasing is that these took about 9 sessions to highlight first time around and I managed it in 5. So my 75% time saving estimate was particularly conservative.

I think you can just about see both sets of highlights on the striations. I honestly think there is a much finer touch on this than my recent Trygon. 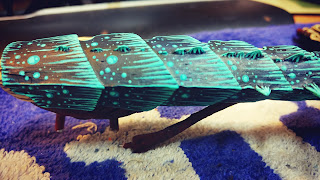 The brush strokes are a bit bolder on the shins for instance but I think overall I'm achieving the best I can. I still wish the striations could be finer but I see an improvement and subtlety in places so at least I'm doing my best and not rushing it. 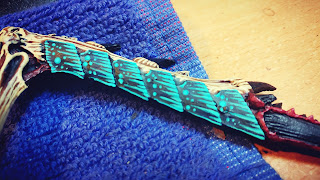 Bio-cannons also got done which meant I was on to the back carapace. 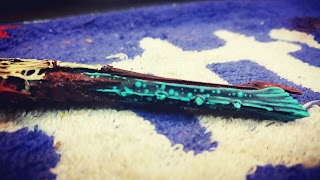 When I did the head and carapace sections last time I got really despondent afterwards. There was something that made it feel like an enormous task ahead but this time round I felt great. Also interesting was the fact I am highlighting the spots as I go, whereas I think I did them all in one or two sessions first time round. 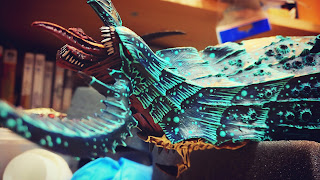 That means I'll save time at the end too. I've two big plates to do next and their vents. The vents can be quite tedious, I did consider doing them separately and just focusing on the plates. However, like the spots its just something I can do as I go along. 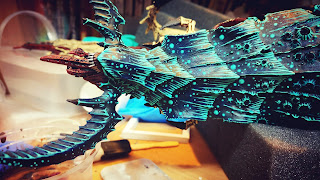 The dots in particular are handy as with all the fine control of the striations and the paint becoming sticky in the heat it's always easy to blob in a dot. I don't get hand cramps but it's much harder to do those lines than dots, it breaks up the monotony. Again that's important because despite the good feeling I had after the last session I was once again wracked by doubts before doing these plates, but feel much better now they're done. 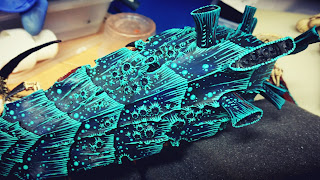 Here's a close up of my highlights so you can really see the detail in the brush strokes. It amplifies everything so you can see they're much chunkier than I would like but c'est la vie. 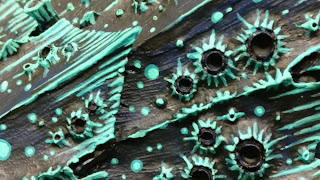 And the head itself, you may have spotted earlier I've painted the eye orange, you can't see it here. That's the base for the rest of the yellow, it'll be pretty cool to get that done. I'm also looking forward to highlighting the fleshy bits eventually. 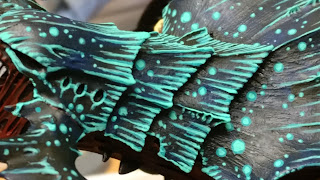 I have three big plates to do next and then it's just lots of progressively smaller/easier tail plates. I'm really anxious to see this done, there's actually still a lot left do though. All the second bone highlights [and maybe third!] fleshy bits and green glows on the vents, not to mention the claws/talons. But my hobby season is drawing to a close and I'm thinking about next year's To Do List already visualising those projects boxed off and complete. First things first though...
Posted by 40kaddict at 00:15