Third Anniversary of the birth of the Man Cave

It's the third Anniversary of the birth of the Man Cave. For one reason or another I forgot to celebrate the second anniversary of 40kaddict Towers - the 40k man cave. Some would argue the man cave was a luxury, all in it was £1,200 - £1,400 but that's around the same price as a Warlord Titan and I'm pretty sure I've got more hobby bang for my buck with the man cave. In actual fact it was a necessity as utilising space in the house for hobby became a continuous source of friction between me and my '40kwidow'. Of course the problems still exist but for the most part 'out of sight, out of mind' has meant the friction rarely causes a spark so for this reason the actual value of the shed is priceless.

As you can see from this picture last year it's very cosy, with far too many projects on the go

Since it's completion it has had a small upgrade in the magnetic fly screen over the door - the likes you see on all those infomercials. Absolutely amazing, I've painted a few times in the evening on a hot night with the door open and the winged insects that gets stuck on it can be really spectacular. I've since added some over the window that opens too. 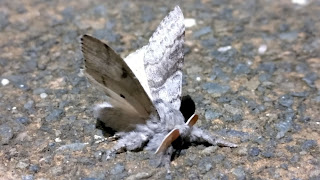 I still have plans to get a solar powered ventilation fan, but that will require cutting a 100mm diammeter hole in the wall, which I'm pretty worried about. But this will mean that I'll get a little more air circulation going, to expel the hot air in summer and help with the humidity and concerns about mould in winter. Thankfully the mould has been kept at bay with my dehumidifier and I occasionally organise all my stuff so I'm making better use of space, even if it's really untidy.

Lastly I hope to completely recoat it with my waterproof paint. I've gone over all the nail holes with filler so they're easier to paint. I might have sealed in some rust that'll no doubt come back to haunt me but I feel like I'm doing something to maintain it's structure at least. I had enough paint left in my tin to paint the two main sides you see and are exposed most to the elements but a new tin is required, although £50+ for 5 litres is a big ask, even though it's top quality protection.It only took 90 minutes so I should remember that for the next time.
Posted by 40kaddict at 12:10