Bless me readers for I have sinned, it's been nearly 4 months so it's long overdue, although I have posted a number of 'where's my head @' which does fulfill a similar role.

Obviously I recently managed to complete my Ravenwing which is a huge milestone achievement but what now? Naturally I had a plan on what was my focus next and now that the reality of my next project has arrived I've abandoned/postponed [?] it. But alongside that I imagined these guys would be emminently achievable between now and the end of the season. 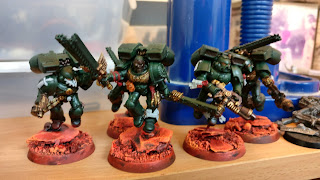 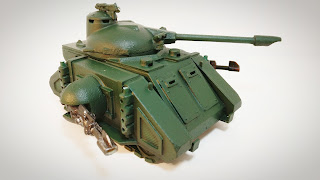 However, it's the Genestealer Cult that I suddenly got a sweat on to paint. I mean it's been tempered pretty quickly as once again it's monotonous and fiddly. It's almost as if I don't like painting! 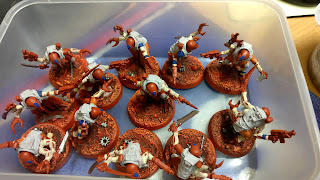 But the reasoning is that with these complete I'll have considerable quantity ticked off on my list but a reasonably sized GSC force [together with my Brood Coven and kitbashed cultists and Stealers] that could form the makings of my Armies on Parade display. That shouldn't be until October/November so there's no rush but better to get a crack on now and if I get sidetracked by the afore-mentioned projects I can revisit early in the 2017/18 Hobby Season to crack on and meet that AoP deadline 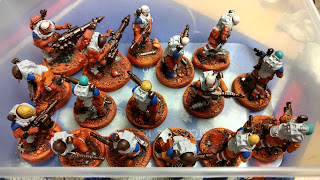 I've some other Great Build items I have that I might throw in the mix too, not to mention perhaps move the Deathwatch on as then I'd have completed all the Deathwatch Overkill models and additionally they could be part of my AoP display...

Oh, and there's this too, which I'm relieved I'd not got round to abandoning the idea of magentising it and just making a Dark Shroud as the Land Speeder Vengeance looks pretty tasty now. But it will require that magnetising which I foresee as a hurdle already... 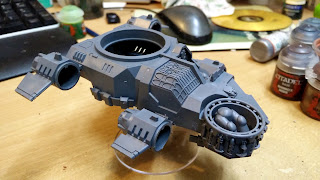 Anyway, lots on my palette, a lot of it that was on my palette last time which strangely enough did not feature the Ravenwing at all! So much for these overviews ;)