I've cracked on with these, patiently accepting that the next stage of highlighting would be roughly two models a night. It's funny how the very thought of highlighting the green was preventing me even picking them up but at this moment in time offers no such deterrent. Therefore, after the Caliban Green first highlights I applied some Black in all the recess and shading. Really this should have worked with the zenithal application of the Angel Green Army Painter spray but really more black was needed to blend properly and make certain areas more defined. 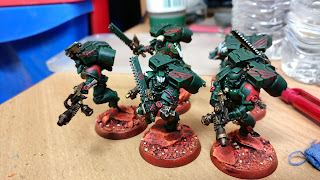 I then followed up with my second highlight. Recently my Bastion and Drop Pod's second highlights were an application of Waaargh Flesh and then glazed to make it more woodland green than olive green. However, I decided to just mix Vallejo Goblin Green with Caliban Green. This gave me the similar shade to the Waaargh Flesh but now in the correct hue, therefore not needing the glaze. Granted the consistency between preparing the mix would be different between each application but you can just about make out the difference are minimal and even match favourably with my Dark Vengeance Tactical guy in the background. I guess it doesn't help to forget your recipe... There's a little more contrast on these, darker in the recess but actually I like that and their poses are more extreme, hence more shadows are warranted. 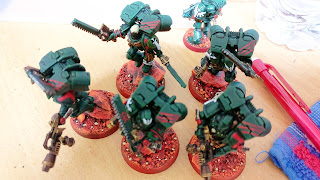 I also picked out the Assault Squad and tribal markings. These need to be shaded a bit but the bulk of the work has been done, even the bases have nearly been brought to completion. 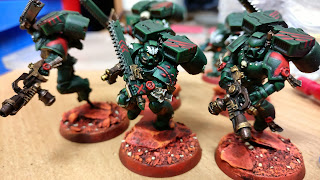 I've still a few details to pick up:
And then they're done, amazing how these have gone so smoothly when they had seemed so difficult
Posted by 40kaddict at 12:15