Game 2 and I'm paired with Matty Longmore and his Blood Angels and we're facing the Deathwatch and Eldar pair of Danny Evison and James Maynard. Unfortunately I've little detail about what everyone took. Danny had a Warp Hunter, two Hornets and a load of Jetbikes and Jame's Deathwatch were in a lot of pods. They conferred quite a lot at the beginning of the game which I was reasonably pleased about because I thought we were on a road to a hiding anyway so the longer it was delayed the better. They eventually decided we should set up first, at least that's what I thought, and that given how we'd been handed to go first I was damned if I'd let them dictate the play like that and so I suggested to Matty we deploy first with a view to go second as the rules dictate. Actually it turned out they had deployed first and elected to go second already - they just had nothing to deploy as the drop-pods were in orbit and arrived in their turn 1! 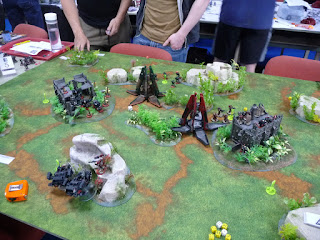 Regardless, with nothing on the board Matty and I could only play the objectives we picked [sadly I didn't record what we achieved but I know the VPs per turn]. Facing an empty board I think we must have captured and objective and held another one [my Tactical Squad and Matty's Veterans/Honour Guard (?) on objective 6]- using our drop pods for board control. We scored 2 VPs this turn. 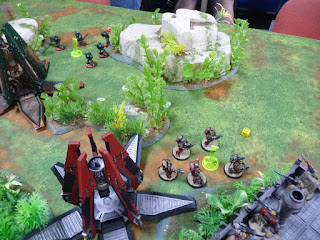 James drop pod arrived, and his Frag Cannons tore through my Ravenwing despite the bolstered ruins they occupied. Not much else happened and they scored no points. 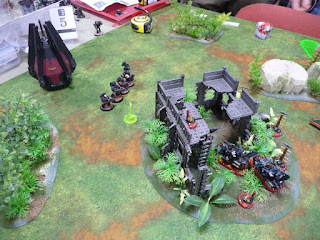 Swift vengeance came in the form of Matty's Dreadnought and my Dark Talon, removing the Deathwatch from existence. We managed to score another 4 VPs this turn, I recall one objective was to get one unit each into our opponents DZ. We'd both failed our run moves in the previous turn to reach their zone with our drop pod occupants but this turn we made it for 2 VPs and careful conga lining meant they were still in range of their objectives to score another 2 for 4 this turn. 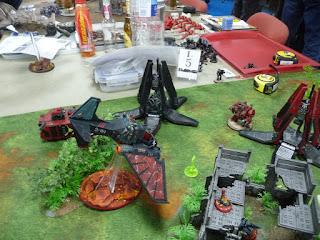 D&J's turn 2 and two lone Assault Deathwatch arrived, the other is behind the hill in the second shot. Half the Hornets and Jetbikes showed up with the Warp Hunter but didn't do a huge amount of damage as far as I can tell. They tried to kill off my Tactical Squad but 2 survived. 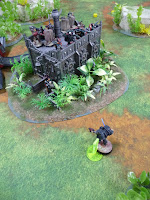 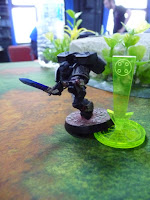 Bizarrely, despite being completely LoS blocked by the hill James did move him into cover and failed his dangerous terrain test and then armour save. Danny couldn't believe he'd done it as there was no need and I said to forget about it as it was a moment of madness and put him back on the board - Double trouble is that kind of event in my book. Anyway they scored 2VPs that turn I think from capturing the objective from my Tac Squad. 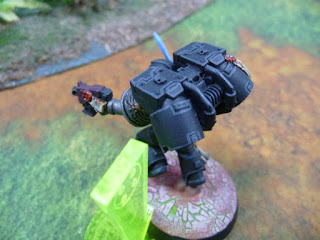 Our turn three and fate handed us a perfect selection of cards to score 5 VPs if we managed to get all our ducks in a row. There was hold objective a couple of hold objectives and score 2 VPs if the other force holds 1 so Matty's Blood Angels needed to be on objective 6 to double up on the two named number objectives I was holding, probably my Land Speeders being one of them. 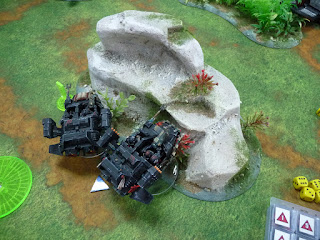 My Flyer zoomed in to target the bikes, I got greedy and the Rift Cannon was placed on the Deathwatch, killing one but meaning the remainder would get a cover save from the rock against his Hurricane Bolters. 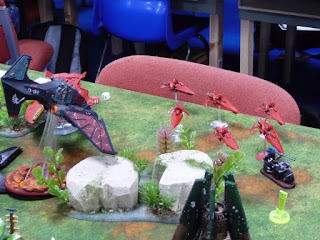 Perhaps I should have taken out the Jetbikes, although they all seemed to have survived anyway. The Dreadnought smashed through the Warp Hunter. We come to tot up the scores and notice that Matty's veterans have moved off objective 6 into cover meaning we don't double up but thankfully spot his razorback holding Obj 1 and we end the turn with the 5 VPs. 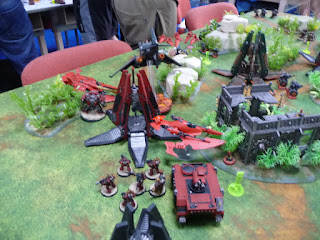 Part of our mission was to score Obj 4 which I thought required me to kill the Deathwatch but my Scouts were ObSec so captured that regardless. Unfortunately they were then exposed to the two Assault marines. 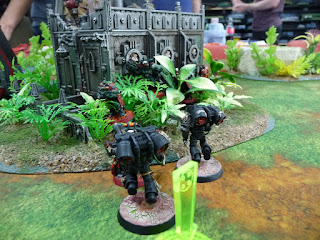 Who had to end their control of the objective. 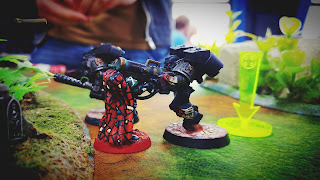 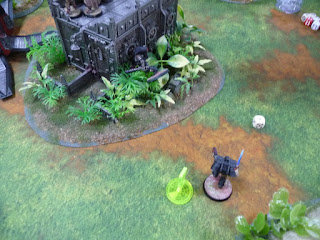 One of the Hornets managed to flank my Speeders but his shooting was well off. 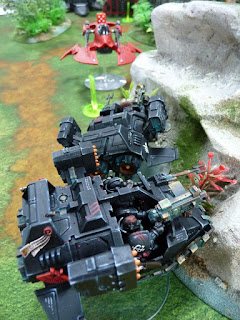 I dunno what was happening here. 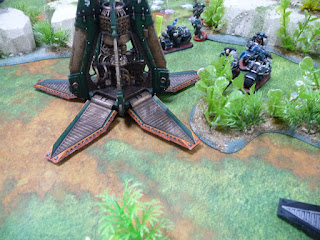 I dunno what was happening here this pic may be out of sync. 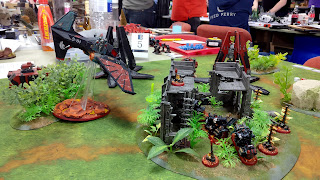 The last of the Tactical squad headed for the drop pod, I think he was eventually gunned down 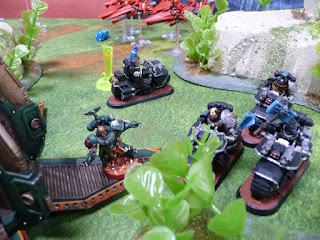 I had Obj 5 which was behind this hill so I zoomed the Talon over in an attempt to capture it from the lone marine. 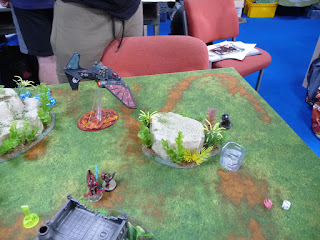 My Speeders put an end to the Hornet. We finished turn 4 with another 2 VPs. 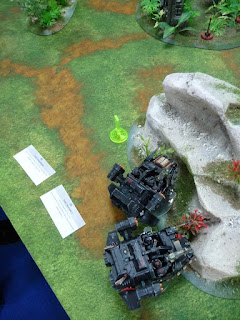 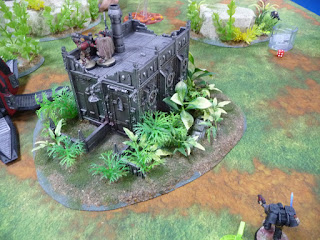 The second Hornet tries to achieve what the first failed to do but again his shooting is comical and ultimately pays the same price as the Land Speeders take their second scalp! I thought Danny was going to evict his dice from the building at this point ;) 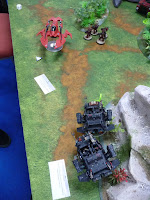 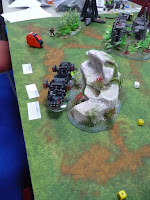 My Dark Talon gets into position and we score 4 VPs. Somehow I don't have any more pictures but D&J score 4 also to make it 17- 10 at turn 5. 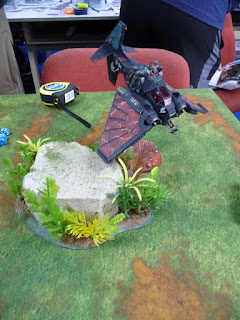 We rolled for turn 6 and it continues, we score another 3 VPs, I think from individual objectives and D&J score none. Turn 7 happens and we rack up another 2 VPs and D&J finish strongly with 8 VPs in one turn! The final score was 22-18 and we did 1055 Blood Points.

Another great game, highly tactical and quite a surprise to come out on top. As much as I see the wisdom in leaving a lot of you force off the board it did give Matty and I the opportunity to control the battlefield and get up a healthy lead. I've played a fair few Maelstrom games were despite this advantage loss of troops later on has lost me the game but I think it's always better to get a head start than chase from behind. Their 8pt turn 7 shows how that's possible but that was just lucky they got the 7th turn and even then a win was impossible. So, 2 wins, a lot of VPs and some considerable kill points - how well could I actually do in DT2?! Lets find out in game 3.