Rob from 30kplus40k shared the horrors of his workspace the other day so I also felt the need to reveal just how cluttered the man cave has got in this panoramic shot of over 180°. This is what happens when you get so wrapped up in a project that everything else goes to wrack and ruin. I really can't wait until the Ravenwing are done and I can tidy this place up. Part of me can feel that will power and motivation draining away as I reach the end, to be fair to myself though I have been pulling 12:30 finishes to get them moved forwards so it's understandable that fatigue is starting to be a factor.

My last effort involved basing the six standard bikers. Five of these were mounted on the daemonscape1 bases I bought just over six years ago! The remaining bike was on a Secret Weapon Miniatures base that was most similar to the other five. You may also note the original Dark Vengeance Ravenwing model on the far left that I'm using for reference. The newer bike's highlights are a fraction lighter but otherwise it's a pretty good match I feel. My previous reservations about just how large my palette of colours had got are slightly relieved here as I think they look reasonably narrow in tones, the Knights might be another thing though... 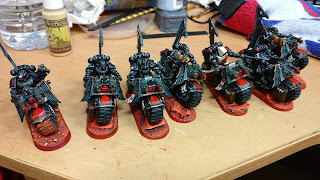 I think there's still a little work I need to do on the headlamps, as well as Bonewhite chippings on the bases. As you can see the OSL on the headlamps is dubious in the least but it does match the original one for the most part, so at least they're consistently bad across the group. Also some of the angles I've base them on are a bit annoying. I wanted them to look slightly dynamic, how the Dark Vengeance bikes are posed but the drilling and pins on these haven't always produced the desired effect. I did do one of the plasma dudes wheelying though so there is definitely one that's cool ;) 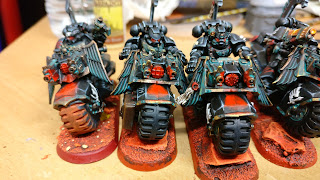 This is Brother Adam the 'dandy Huntsman'. We went to see Adam Ant the other week, he's not my bag really, my wife was a childhood fan though and it was a Christmas or Anniversary present I'd got for her. I'd wanted to do some more warpaint on a helmetless model and this seemed like the easiest/most appropriate option. I'm not sure it was the best choice of model as the hood obscures things so it's not immediately obviosu what's going on but doing this justifies me not painting the eyes, so it had to happen. Ultimately it's not rubbish so I'll take it. 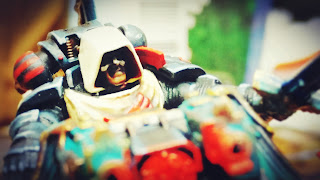 You can also see the three red tribal stripes on the stabilising vent on the back pack. Three have these markings, in case I want a unit of three. The other three have markings on their right shin pads. Alternatively I take any upto six with the straight back banner to identify as a unit.

Mounting the seven Black Knights/Command squad next...
Posted by 40kaddict at 12:12