The filters on my Camera360 phone app are usually only used to make the images more clearer, except for the cinematic To Done pics that use more aggressive/creative filters to make them look awesome, However, when I took this picture last night I had to use it as my WiP shot. I've finally layed down some Verdigris. This is a big deal, a real milestone that will herald the near completion of this project. [You'll also note the slightly untidy company number :( ] 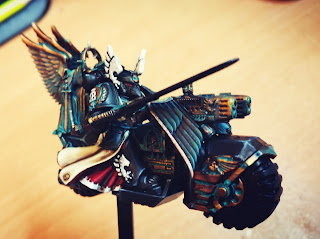 I was once again concerned the Verdigris would spoil all the metallic efforts so far but once again these fear were unfounded as application enhanced it and I was sensible enough to leave some bits well enough alone. Obviously I decided to finally add the Champions shrin thingy on the back too. 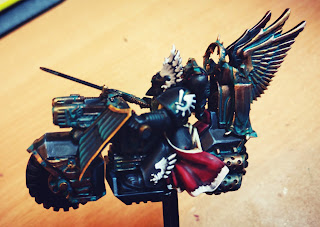 Thhis is really starting to come together, which is a relief as I feel like I've been working on them forever. Now as happy as I was at finally getting the patina started I could only do this one before I felt enough was enough. I started flitting to other elements - the company numbers on all the shoulder pads that are brass - they really needed doing before any Verdigris is added. I also did some bits on the banner and some of the purity seals. 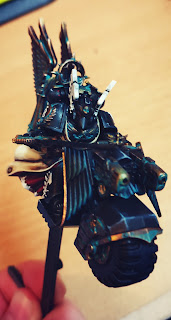 All the bikes have obviously had their second highlights done. I was convinced they were too light, I might still be right in that view but wasn't convinced knocking them back a bit with some sort of glaze was worth the effort. As you can see this group look pretty cool as they are. 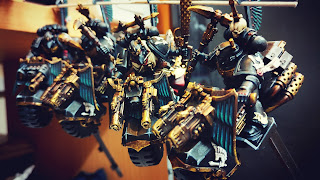 And the other six, hanging out. With the Champion taken to the next level I'm hoping the remaining 12 can be patina'd up at least three at a time. That's a daunting thought, four nights of just getting that done maybe I'll be able to kick things up a gear and finish it in three? 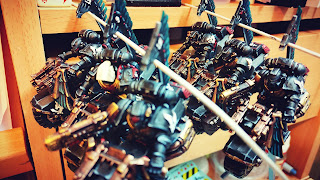 Then it'll be all the fine details. They are fun to do, feel disproportionately time consuming but really do add a lot to the models so ultimately worth doing - I certainly wouldn't have them any other way. 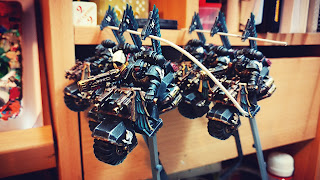 I know this is dragging on, I'm getting closer every day though
Posted by 40kaddict at 12:14