Round 2 and Aidan was my next opponent. It turns out it was his 4th game of 40k and given some of the lists that had been brought the guys running the event had advised him to take a Stompa just to stop him being mauled completely. Of course for Purge the Alien that does me no favours whatsoever but given his newbie status I was more than happy to go through this like it was a friendly game. Although with hindsight, due to the time constraints, I probably didn't spend as much time helping him learn the game as I would have liked.


The low down:
Probably due to his inexperience Aidan set the Stompa up in the far right which gave me the opportunity to set up on the far left and hope I could avoid the Super-heavy for as long as possible. Interesting note - this was a resin Realm of Battle board! 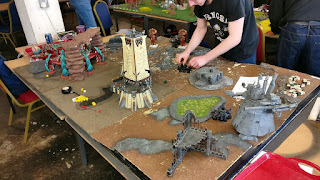 Luckily I had a lot of cover to keep my safe [potentially]. First turn I lost a few Gaunts due to poor Skyshield saves. More importantly I lost my Zoanthrope. 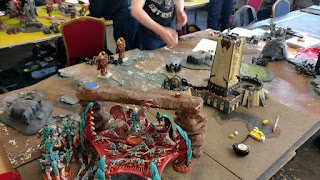 In return I pushed forwards and managed to kill up but 1 of the Tankbusters on the hill behind the statues. Couldn't quite get that kill point. Probably about here I realised that the Zoanthrope in a pod behind the Stompa might have got me a Lancing hit on him and forced him to kill the Zoie leaving the rest of my force unmolested. But with time short avoidance was still probably the better tactic. 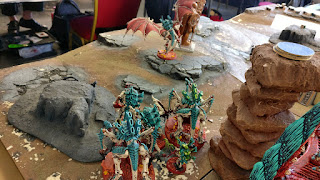 Clearly at turn 3, I'd been using cover and the Venomtrhope to keep my MCs alive as long as possible. 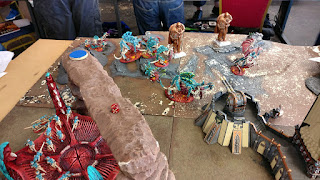 The Stompa was having none of it though and redoubled his efforts to kill what he could. 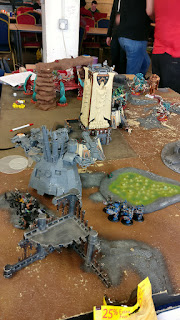 Luckily for me the MCs survived, unluckily the Venomtrhope did not so now they were all exposed. i did take out the lone tankbuster. 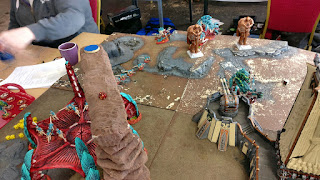 I also took out another mob so I was up on 2VPs. The Tyrannocyte arrived and my Devgaunts let rip but only amounted to 1 wound on the mega-nobs :( They were going to die. 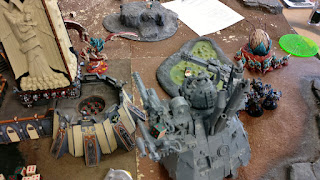 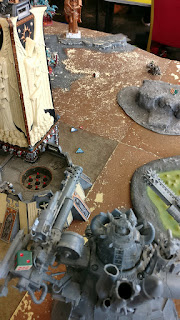 Final score was 7:4 to Aidan. He scored 4 kills, First Blood, Slay the Warlord and Line Breaker. I managed to kill 3 [not sure what the third was] and Linebreaker. 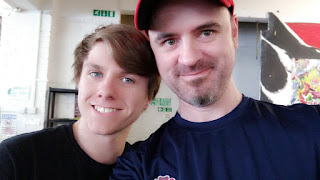 I hope Aidan had a good game, sure a Stompa was a bad match up for me and the organisers were apologetic for suggesting he take it but these things happen. Like I say I wish I'd been able to help him a bit more in learning the game but I suspect in a few months it'll be moot anyway. Ha!