Round 3 and Matthew was up next with the unholy alliance of Tzeentch and Nurgle. He had Fateweaver so was blessed with more psychic powers than he knew what to do with - his choice of cards looked like a deck of playing cards! He also had another Daemon Prince [on foot] some Plaguebearers, a couple of discs, 3 Screamers, Pink Horrors and some Rotflies [?]


The low down:
Matthew put his objective on top of the stone tower, mine went under the Skyshield and I just holed up daring him to come get it. Which he duly attempted, including summoning some Nurglings in front of the Skyshield. His Screamers went to the top of the tower and circled their objective like hungry sharks. 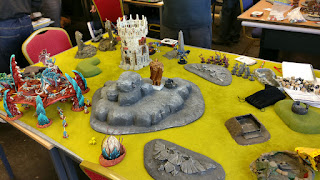 Having surged forward I advanced in return. I managed to kill two of the Botflies and the Tfex and a Carnifex killed the Nurglings getting me First Blood. My Genestealers failed their charge on the Chariot leaving them exposed and likely to die next turn, which they did. Fateweaver swooped in close he managed to Peril on his roll, got a 1 but passed his leadership. Shadows in the Warp reducing his Ld by -3 but Tzeentch conferring a +3 bonus! He also re-summoned two of the Botflies next to the Skyshield. 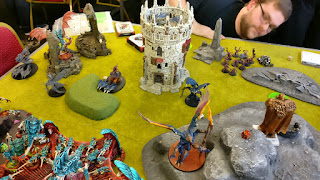 Not quite sure what took out the disc chariot and the lone Rotfly but I think the Tfex did that with his Torrent Flamer, getting a 6 on a penetrating hit and blowing it up! That was a nifty piece of luck. Fateweaver summoned some Flamers and the Daemon Prince perilled, rolled a 1 and subsequently passed his Leadership on snake eyes! Two chances to be sucked into the warp gone begging :( 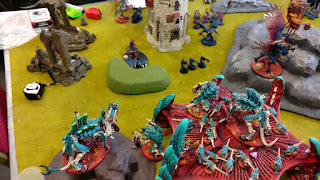 The Tfex and gang managed to wreck the other Disc of Tzeentch, while the Flyrant killed a load of Pink Horrors only for them to come back as more Blue Horrors. 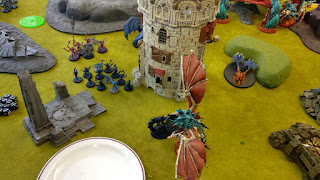 With time running out the tournament organisers seemed to be spending most of their time watching our game. My Tyrannocyte arrived, sort of deviated off the board by an inch but Matthew said to keep it on. It was at this point the organiser pointed out I'd already technically won. 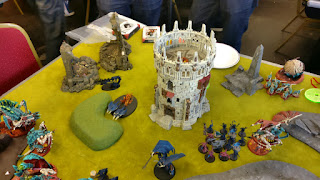 With us both holding objectives and Linebreaker but with me having First Blood Matthew couldn't really do anything in this last turn to score a VP [probably regretting letting me get that pod on for Line Breaker!]. So I wanted to make that a moot point by killing the screamers on his objective. The Tervigon managed to put a few wounds on with his Miasmic spit, the Tfex also torrented them with Acid spray. Brainleech from Devourers on the Carnifex and Flyrant managed to kill the remainder leaving it 5:1 to me. 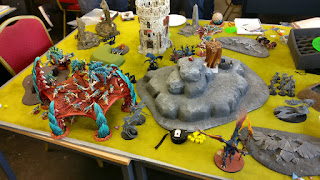 Unfortunately Matthew realised after packing up the Screamers could have Jinked in the towers giving them a much better save but he was a good sport about it, especially as I found out at the end this was his first tournament! 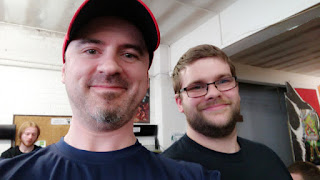 So two loses and one win, I think I came 10th out of 13, ha, ha! The ever-competitive 'nids. I had a great time, organisation-wise it was a bit haphazard with an hour late starting but I think it's been a while since they did one so they're forgiven, we did all get a free drink as an apology.

Winners got £30 GW vouchers and there were lower prizes for 2nd, 3rd, 4th and even some smaller Scythe vouchers for other lower placings. That's pretty cool for just a £5 entry. Obviously I didn't make the cut but they did have a lone pot of Miniature Paints Aquamarine - the new replacement to Anita's Turquoise on my nids so I picked that up. Oh and this... 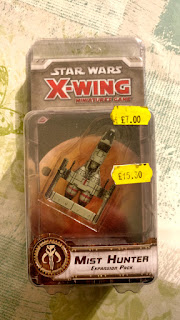 I got X-Wing at Christmas and although I've only had one game and don't foresee it as a regular activity the Scum & Villainy side is definitely my favourite faction as the ships are so diverse and interesting. It would have been rude not to pick it up for that price. In fact they had two and I was tempted to get them both. 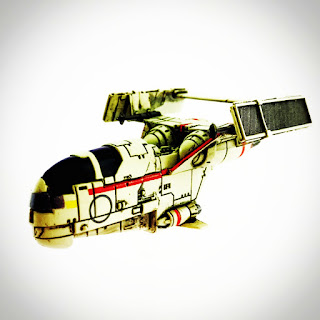 As it turned out folk usually only ever have the one in their games so a second would have been redundant, although I suppose I could have sold it on ebay... Anyway, good times.