It's been over four years since I last went to the Scythe and Teacup but they announced on Facebook a 1500pt, 3 game tournament for only £5, what's not to like? Limitation were only one flyer or LoW and a CAD must be taken before Formations or other shenanigans, apparently to keep the cheese down [not so sure it was successful ;) ]. More of a concern was the 2 hour time limit for each game! You know me and how long I take, couple that with the event starting an hour late and things were less auspicious than I'd hoped. Now pictures are less than usual because of the time factor so I'll do my best to try and remember what went on, bear with.

However, when I was there last I picked up the Miniature Paints Aquamarine that I'm now using as my Anita's Turquoise substitute and I hoped to find some more. I've found it on ebay but when you add postage on too it's like £4 a pot which just seems a bit annoying.

Anyway Round 1 and Ryan with his new Aeldari alliance, wonder if they'll get a new name in 8th. He had some Venoms, a Raider full of Incubi and Harlequin Solitaire, a couple of Farseers on Jetbikes, Warp Spiders and the Yncarne...


The low down:
You can see 3 of the objectives, top left between the bunker, debris and hill. One below my Genestealers and one in the middle on the hill next to the Honoured Imperium Statue. 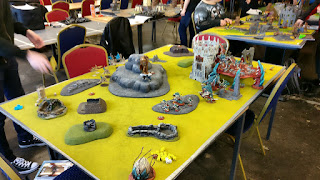 The other two are on the hill and in the Shrine. Ryan focused on the Genestealers taking them all out and leaving the Broodlord with one wound! Serves me right for not putting them within range of the Venomthrope! 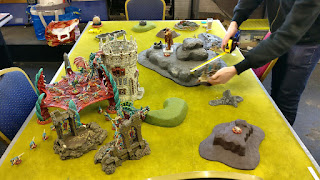 My turn and the Flyrant managed to destroy a Venom getting me First Blood, the Broodlord retreated to gain cover from the Venomthrope and the Carnifex moved up with the Tervigon, who spawned Gaunts to secure the centre objective on the hill. 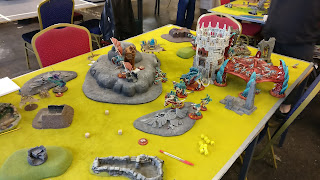 As the Venom, or one of it's occupants died the Yncarne was born [reborn? reincarnated?], bother! 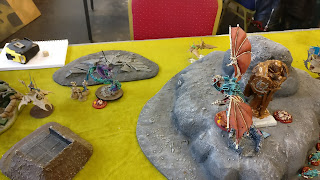 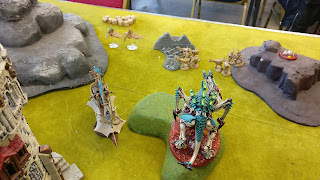 It disgorged it's Incubi and the Solitaire then was made Invisible and everyone decided to shoot the Tfex. 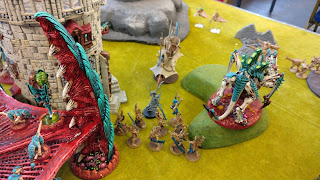 Which couldn't stand the Firepower of the Raider and Warp Spiders. The Incubi charge the blob of Gaunts, cutting through a third of them without any opportunity for me to hit back. 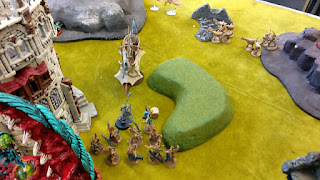 I spawned Gaunts to throw into the melee but really these would be suicidal sacrifices if they got into combat next turn. 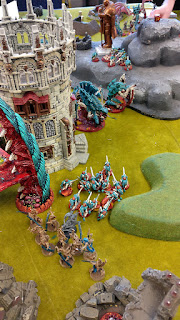 I think the Flyrant downed another Venom but I think it was just wrecked leaving the occupants safe in their disembarkation. 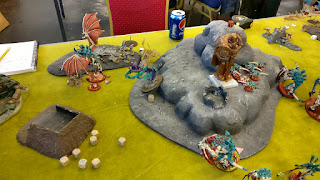 Ryan's turn and both the spawned gaunts in the centre and the Carnifex were dispatched with ease. 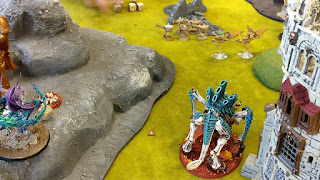 Additionally the second brood of gaunts were shot to one left and was subsequently killed alongside what was left of the big blob by the Incubi. 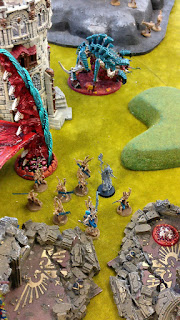 My Tyrrannocyte arrived and I managed to put a wound on the Yncarne and kill of the Dark Eldar next to the Venom leaving a bigger gap around the objective. Unfortunately the Yncarne did his best Fenella the Witch impression and popped up where the Dark Eldar once stood. So much for securing that flank. The rest of the Dev Gaunt and Flyrant shooting did significantly less than I'd hoped, probably killed the other Warriors though. 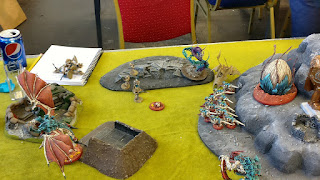 Last of the Warp Spiders arrived to steal another of the objectives, alongside some turbo-charged Farseers. 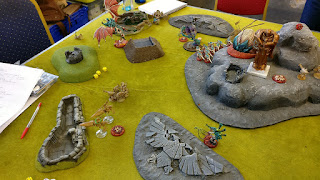 I think the final score was 10:4. Ryan had three objectives amd Linebreaker, I just had one and First Blood. I think at some point I realised I may well not have been out-gunned but definitely out-classed. Certainly seems odd that a faction/factions that have so many benefits were given a new way to play with equally good benefits. With the Soulburst actions allowing movements and shooting in my turn it was a tough ask of the nids. That said Ryan was an awesome player and he went on to the final and think may have won the entire tournament, so there's no shame in my efforts. 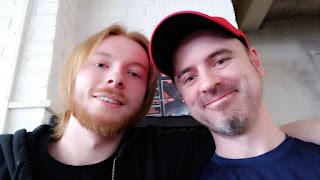 So, reinstated my habit of losing first game, what's up next.