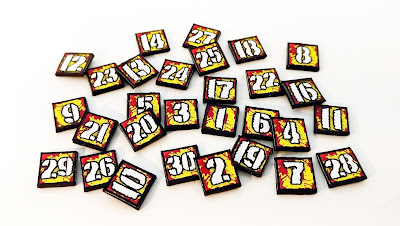 It would appear that keeping track of wounds is going to be a meaty task in 8th Edition with the likes of Imperial Knights having more than 20 and the large Tyranids a dozen or more. As much as everyone seems to think that's still feasible with dice, who really wants a D20 sat next to their model? I mean at least with D6s in 7th you could purchase some unobtrusive little ones [not that anyone did], D20s are big beggars and it'll just look downright odd.

Of course I immediately saw that my own markers were slightly lacking, insomuch as although they went up to 10 [thank you Doom of Malan'tai, we still miss you], they needed a few more to meet the bounty of wounds set to be given up to our big vehicles and monsters. I'd also seen plenty of folk clamouring for a solution so I thought I better step up and fix that uncertainty so we can think about the rest of the sky that's falling - like GW making massive new marines, 'cos it's not like the community hasn't been crying out for true-scale, how dare they give us what we wanted?!

Anyway, I added in new markers up to 30, or actually it'll be counting down now, which I'll have to get used to, excuse me while I write some long-winded scathing rant to GW about how the fact I'm now forced to count wounds down and how it's ruined my life! I digress.

I've also done them in a variety of colours, either to match your faction, or to have a range to choose from to attach to different models so they don't get mixed up. So I've got: 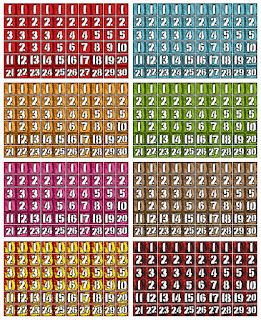 Choose what suits you best. Obviously when 8th hits these may end up being impractical, goodness knows how to store them all so it'll be easy to find the specific number you need. It may well be that laminated datasheets with dry wipe pens used on wound trackers will be the most practical way to keep account of how damaged someone is. But that's still not as easy for your opponent to see how wounded a model is as a marker, yes even a dice, right next to that model.

I know some have suggested rotating wheels, similar to the old Titan void shields or the discs for X-Wing but they seem too big. Alternatively there are these handy knitting/crochet counters that folk are raving about. Potentially they could be a good idea, again for me it reall depends on size. 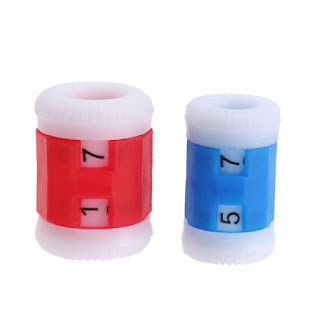 Then there's the other option I once saw of putting small elastic bands on the model but again that suffers from 'counting down' issue I'd always railed against and therfore counted up. If we're to count down remaining wounds, as you will HAVE to do in 8th, your Imperial Knight is going to have to begin the game with twenty odd elastic 'looms' festooning it's Adamantium hide like its at Spring Break before the game even starts!
Posted by 40kaddict at 12:06