PeteB, Ben and myself were lookign to have a boardgame night butBen suggested a trip to Wargames, have a Kill Team battle and check out what's in store and how the Birthday Bash tickets were doing [8 confirmed so far!]. We set up the three way Kill Team on this urban motorway overpass table that Martin subsequently used in his first battle report.

Ben had a mix of Flayed Ones, Necron Immortals and Scarabs
PeteB went with the Ravenguard formation that comes with the Kill Team box [they were unpainted and unfinished but to hand so he'd picked them for convenience]
For simplicity I just proxied my Ravenwing bikes as Black Knights, five of them, done! 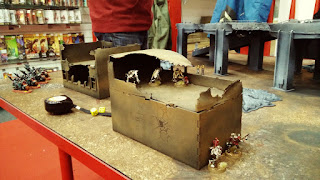 My inital Scout move put me inside my 'biker club house' a place where all my kills would subsequently congregate. 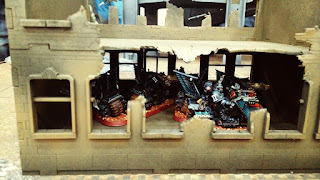 Ben got off to a good start, killing one of Pete's Marines, which is more than can be said for the Ravenguard, whose shooting included five 1's, one after another! I did point out Pete had brought figures with no arms so it was 'cinematic and fluffy' at least. 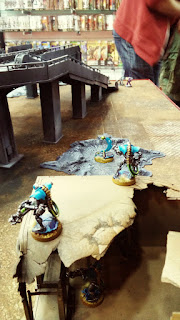 I split my Knights in two groups, two went for the middle and the other three headed for the Ravenguard. i did kill something first turn, but I can't remember what it was. 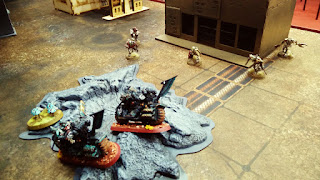 Ranguard continued to hold the high ground on the overpass. 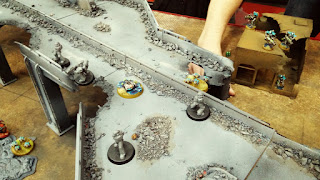 This gave them a perfect vantage point on the Knights [or at least someone got a good shot] and I foolishly decided not to Jink and lost one of the bikes [I think it was also the one that ignores cover on shooting]! 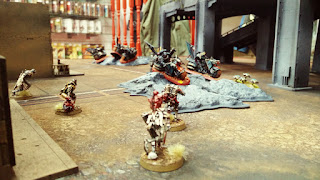 The second bike was overrun by Flayed Ones and Scarabs, suddenly I was down 40% of my Kill Team. 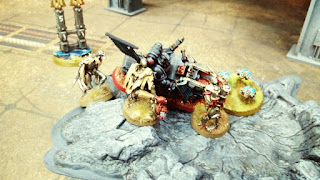 My remaining bikes whittled down the Marine numbers in the corner. 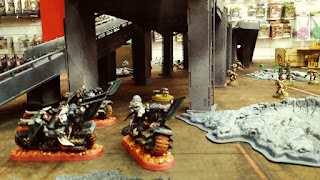 With the last Ravenguard ending up locked in Assault with my Black Knight. 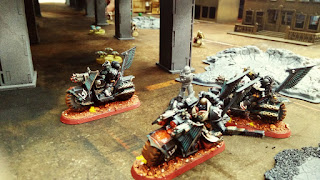 The unengaged bikes headed for the on-ramp, turbo boosting to the top. 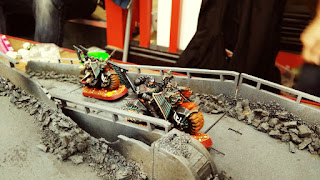 The Assault ended with the last of my bikers gaining the ramp, I think he also shot the Scarabs to pieces. He'd later jump off that wrecked section to the left [much like in Tron Legacy] and head to the objective in the crater. 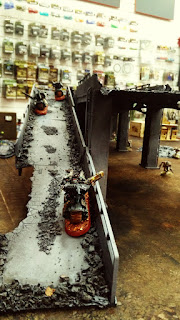 Meanwhile the other Knights managed to shoot and assault almost all the opposition on top of the overpass, with just a Scarab and Marine left, which were overcome. The

The only objective left was the one enarest my biker club house and a furiously ineffective round of shooting meant that the last Ravenguard missed again on a 1 and the Immortal failed to wound or was saved. 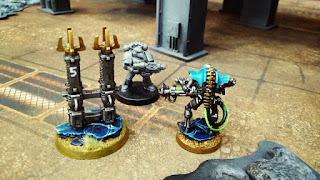 End result was me holding two objectives and a full house of dead 'party goers' in my bike club house with Pete and Ben contesting the last objective. I'd heard Ravenwing Knights were effective but their twin-linked Plasma Talons, BS2 overwatch, skilled rider and Jink re-roll is a great combination. If I hadn't been stupid with my first saving throw it would have been an even more one-sided affair. That said the Flayed Ones were pretty brutal too and as usual the extra shots from 6s on the Tesla are even more telling in a Kill Team situation. As for Pete's dice, they were appalling and probably should be consigned to the bin! We had a laugh though.

I'd like to swap in a Land Speeder into this force, five Knights seem a little OP but I think the Land Speeder will make play different and more of a gamble. However, I wouldn't be able to take a Typhoon without failing to meet the 4 non vehicle model KT requirement as I'd have to drop two Knights. Unfortunately the other option is replace the Ravenwing Command Squad for standard bikes which are cheaper, but then that takes up my Fast Attack slot. Maybe the guys will let me try 3 Knights and the Land Speeder anyways...
Posted by 40kaddict at 12:18