For all those interested in the Birthday Bash I had chance to nip to Wargames at the weekend, they were hosting Aceface's ITC Last Chance Open and I was hoping to pick up Blood Bowl Death Zone Season 1 [more on that later]. Martin was pleased to let me know that so far there are 18 tickets bought and he'd be letting the 54 guys in attendance know about the event, if they wanted to take part in something a little less competitive. So rest assured it's going to happen, we only needed 10 people to make the prize support viable and we've eclipsed that already. Our number one priority is for everyone to have three fun games, I suppose we could organise a clown and ballons to ensure everyone must have fun! ;)

But while I was there I thought I'd take a few pictures of the tables just so folk can get an impression of what will be on offer. As you can see there's a wealth of terrain and all tables come with a gaming mat to ensure the most immersive gaming experience, and you don't have to take my word for it, that's the one and only Nick 'IDICBeer' in the purple T-shirt, a stamp of approval in itself. 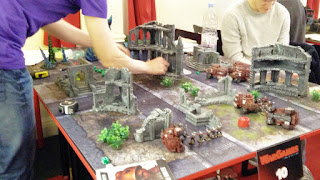 This is just one of the floors, there's another one upstairs, a maximum of 54 gamers but we'll be happy with whatever we get. Hopefully you're all getting as excited as we are.

We've had a number of queries regarding lists, Ian Plumpton pointed out his Skitarii can't make a normal CAD, to which I replied that if that's the only way to take them then that was fine.

Jonathan Lyness also asked about using the Maynarkh Dynasty Faction rules from Imperial Armour 12. They're a little outdated but he's managed to align them with the current Codex in a series of posts on his own blog http://dragonseyeminiatures.blogspot.co.uk/ I've had a look at it and I can't see why it isn't acceptable as he's taking it primarily for fluffy reasons. Feel free to check them out and see if you agree.

Bottom line, granted we've made some, almost archaic, limitations on list choice this is purely to reduce the options for win at all costs lists. If you're worried about your list please get in touch but so long as it's in the spirit of the event it'll probably be fine. We accept that if someone wants to come expressly to win the tournament that's their choice. We want prizes, we want a winner but we want everyone to celebrate gaming and enjoy the spirit of the hobby - the dice rolls that go badly, the failed charges, the fact Deathleaper always gets killed, that's why the tournament loser gets the same as the winner. Some of the best time I've had have been on those bottom tables, with no prizes to play for and everyone in the same boat ripping each other's army choices and decisions apart with the banter.

With that said, we'll be list checking at some point, not sure how we'll organise it but we'll get there, I shouldn't think there'll be any problems. In the mean time, as it's a reduced set I'll be making a set of Maelstorm Objective Cards for each entrant so it's easier to play. So, if you are interested, like what we're trying to do and still haven't bought a ticket then you can get them here: