I have so many projects that have reinvigorated my mojo I just do not have the time, or the speed to tackle them all. Somehow my Genestealer Aberrants have queue jumped, maybe because there are only four of them. Despite their sudden prominence I was not at all happy with what I'd done with the skin so far. 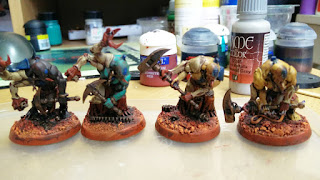 I'd already set a precedent with my original kitbashed cultists about the diversity of skin tones and I knew it would cause problems combining it with the Hive Fleet Gorgon colours. However I must remember to only pass judgement once it's complete. 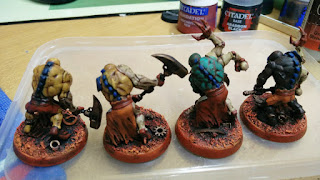 But at least I have some reference for the 'Rogue Trooper' blue and dark skinned abberants. Hopefully it'll resolve itself in time. 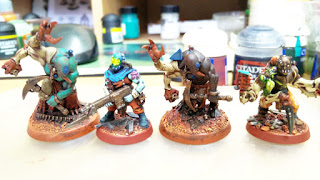 It's quite daunting to have this variety. So many Genestealer Cult armies retain a level of uniformity which looks great. I'm once again going against this urge to create a rag-tag, messy disparate gang that uses reds and oranges as pseudo camouflage, with the occasional chitin blue/turquoise as a colour of prominence within the cult. 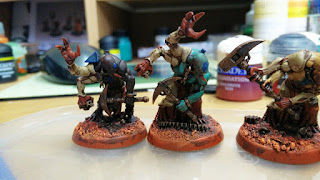 Survival suits are grey/white though. 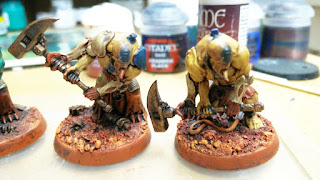 And while I was doing the Aberrants it made sense to try and do the Primus and his familiars. 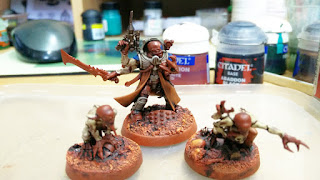 You can see how his colour scheme ties in with the Crashed Aquila Lander uniform, further indicating the pilots mixed allegiance. 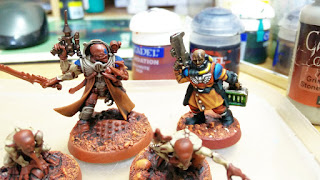 And why not throw in the Patriarch? I literally just found myself doing the Bonewhite on this, I didn't know how it happened. I wasn't even using the Vallejo paint I usually use and next thing I know he was half done but with far more of the darker washed areas visible. 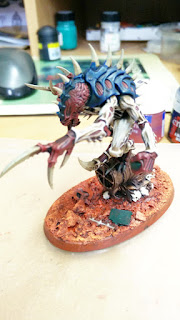 I also picked out the skulls on the base and some of the debris. 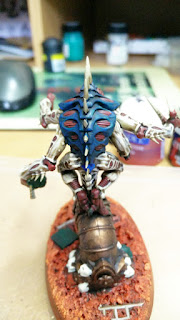 I've no idea why I'm painting him but he is on my list [sort of] so I'm going with the flow.

Of course I did realise shortly after it would have made sense to begin the Magus as well so they progressed as a group so he's been duly fished out and had his coat painted orange - update to follow.