Before Caledonian Highlander PeteB and I got in a practice game in his man cave. I promptly lost the score sheet and it's so long ago now I can hardly remember what happened but I took the pictures and thought I'd just post it up as a couple of standout moments do need to be recorded for posterity.

Looks like it was Hammer and Anvil I think Night Fighting was in as my shooting was at a massive disadvantage for cover saves. 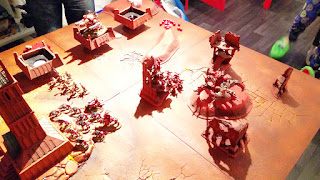 I bunkered down in my Skyshield, as usual. 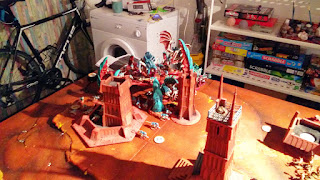 Pete has a Chaos Lord on a bike with an Axe of Ruin [?] he wants the biker to die so it can release a Greater Daemon of Khorne. Well I wasn't falling for that. Given the Tyrrannofex and Carnifex opposite I did not assault after whittling him and his Juggernaut buddies down. I hoped overwatch would remove the last wound and then his Daemon would be stuck out in the open for me to fire and shoot at in my own turn. 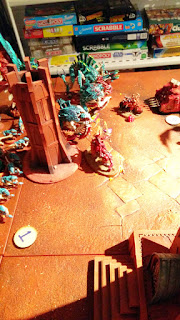 He did split his unit [thanks to the Lord being an Independent Character] in a very unexpected way though, which put me on the back foot again. 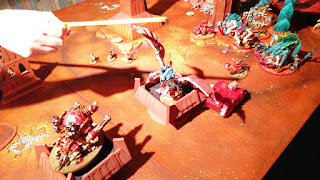 However, the biker did not survive. 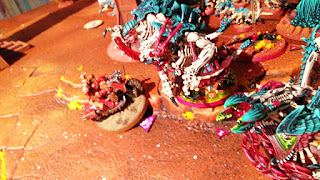 And was promptly replaced by a bigger baddie. Somehow he survived the resultant fusilade. He even survived the assault, wiping out the Carnifex, the Malanthrope and I think the Tyrranofex as well. He subsequently killed my Tervigon on the Skyshield, wreaking havoc across my entire deployment zone...

except for the fact the remaining Termagants, ravaged by the death of their brood mother killed it with two wounding Fleshborer shots! 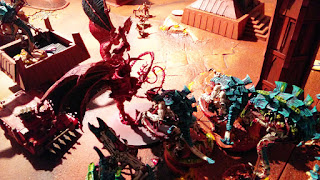 I'd just like to share that point again because I know Pete was going to tell his son about it the next day.


The remaining Termagants killed the Greater Daemon of Khorne with Fleshborer shots.

I think I ultimately won the game on Eternal War and Maelstrom objectives, despite pretty much everything else of significance being wiped from the board [an immoral victory for Khorne?], not that it really matters as


the remaining Termagants killed the Greater Daemon of Khorne with Fleshborer shots.

I probably went into Caledonian with a much higher opinion of my abilities because of this, hence my poor result, ha, ha! These are the reasons we game.