It would seem the Genestealer Cult has applied it's insidious nature into my painting schedule, much as they do in the Imperium. it would seem they're my priority, despite having no urgency or relevance with what I need painting at the moment. In fact the Drop Pods could be used in my Birthday Bash list so really should move back to the fore. Anyway, I decided to work on the blue Aberrant, it's not really apparent in the pic but there is a subtle difference between his skintone and the Chitin spines, hopefully some red washes between the joins will make it stand out more. 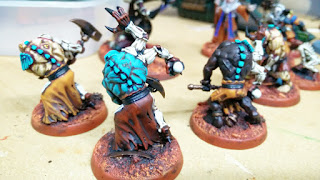 I also did the spines and plates on the 4th Aberrant and some other bits. 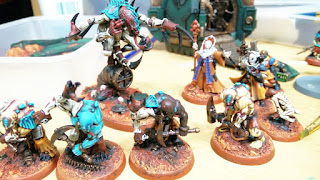 The reason I didn't progress much further was because I had started doing the blue on the robes of the Magus, then did all the blue bits on these 3rd/4th gen hybrids. I also broke them down into groups so I could get a mix of diversity in skintone. It really just gives me the opportunity to play and try different things. With duplicates of the same pose it also helps them look a little different between the groups. 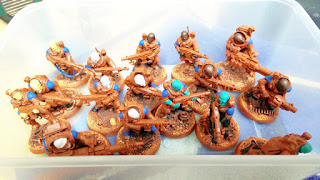 I then followed up with the rest of the Chitin highlights on the Patriarch. If I'm honest I thought this was a bit of a mess, not up to my usual standard. 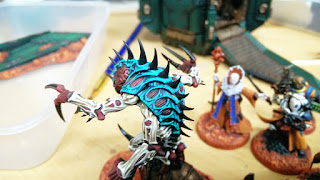 Maybe it needs a little bit of extra highlights, or it could be just the image enhancement but the striations don't stand out, I may add a third extreme highlight in places. 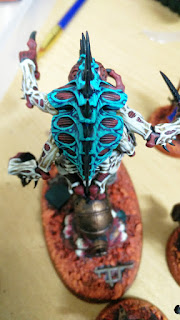 The only other casualty of this enterprise is the tidiness of the man cave, when you're doing so many different  aspects paint pots get scattered everywhere, still 'progress is progress' as the Free Radical Collective espouse.
Posted by 40kaddict at 12:07