As you can see I've gone a little further than just base the human team, I've started to do the grey base coat for the quartered red and white of my original Middenheim Marauders colour scheme. But yeah, bases are done. 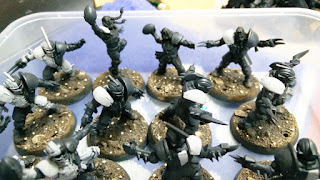 Additionally, I 'd seen someone else do some head swaps on Facebook and I was immediately reminded I;d planned to do the same. With a fair few Space Wolf heads knocking around that PeteB had given me I finally found a use for them. I was particularly tickled in making one of my Throwers 'visually impaired', you know me I'am ll about the diversity.

I also managed to get a pretty cool lineman and Thrower head swap. There's only the three changes I made as some of the other heads were a little too 'mangy dog' looking but I thought these worked really well and will break up the uniformity of the team just a little bit.

I also had a spare Stormcast Eternal head but it didn't quite fit. I've quartered four players so far and picked out the big shoulder pad on the remaining. Four seems to be the maximum I cand do in a sitting so I'll just try that and chip away at an arm or a leg here and there so I can finish them up quicker. 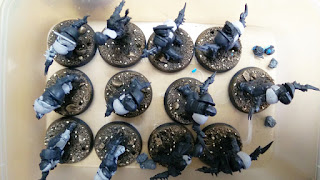 The Orks got based too, I'm less interested in these because although I was going to go with a black colour scheme it's still percolating in my head how to do it. 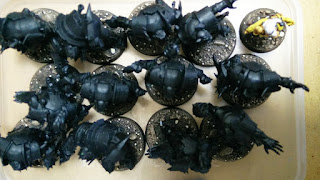 I probably could have done some head swaps on these too, with my Assault on Black Reach boyz but it feels like a lot of faffing at this poing 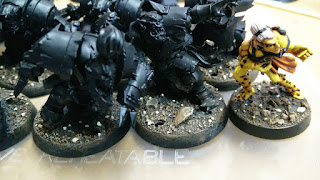 Anyways I get to award myself a couple of Big* Purple and White Stamps of Approval for their completion.