Progress is very difficult to showcase at the moment, n top of that I’ve been preoccupied with the seasonal madness, the prospective new job interview [no word yet on how it went down] and just general fatigue from being anxious about what a new job could mean and then nervous for a week about getting the interview. Anyway, it’s all done now and after it I ‘crashed’ [metaphorically] with fatigue and a tension headache. I’ll either get it or I won’t, there’s nothing I can do now.

However, I did crack on a bit with my current projects, applied some Warplock Bronze to the Assault squad and more importantly advance the second drop pod with it’s first set of highlights and bronze effects. You can see there's a subtle difference in the bronze effect but nothing I can’t live with. Also noticeable is the pod 1 fin that’s been ‘glazed’ with the Valejo Dark Green I have. It’s certainly more vibrant but it seems to have left an uneven effect so I’m a little disheartened by the result. I’ll be looking to get the green Citadel glaze to see if that gives a better result. 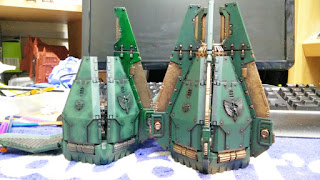 Funny thing is I think pod 2 looks OK without the Waargh Flesh Highlights of pod 1. Hopefully that Waywatcher Green will even things out when I get it, fingers crossed. Otherwise I'll be adding far more re-entry/battle damage than I'd originally planned.

While I was in limbo I thought I might as well crack on with central console radar dome [thingy]. Obviously painting a perfect circle can be quite hard, but not if you use a tube to stamp it on [this was a Calpol syringe plunger, the perfect size]. Now this was a fab first attempt, just far too sharp for what needed to be a diffuse glow. Obviously my subsequent attempts to blend the effect wouldn’t be nearly as good, but it all came out alright in the end. I'll probably still Tamiya Clear Orange X-26 it which will blend things a bit further. 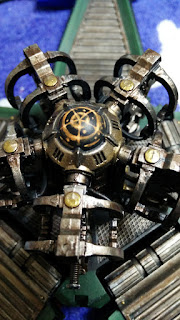 So stuff is happening, just difficult to share because it doesn't seem like much. Anyway, don't forget the Birthday Bash, I know Christmas is still hectic but should you get any Crimbo funds, set aside some of it to join us in Feb, we've already seen quite an interest :) www.wargamesuk.co.uk/events