Someone posted a picture of a Black Dragon Space Marine on facebook the other day and I was reminded of how cool I thought they were, what with their mutated genome, general distrust by the rest of the Imperium and whatnot. With plenty of Tyranid talons I always though they were a chapter I could do something with but starting another army? Nah, that ain't happening. 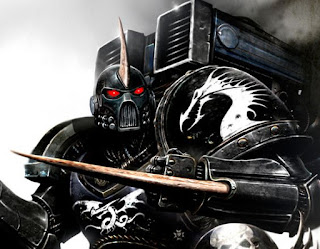 However, I do have my second Deathwatch Overkill box which I have every intention of kitbashing so all the models are different in some way to their original standard counterparts. With that in mind I decided to look at some of the other chapters I might like to represent. First up was any other chapter that was part of the cursed 21st Founding. I love the irony of having these cursed and distrusted chapters being brought into the Deathwatch, where better to keep an eye on potentially heretical astartes than from within the force that might have to prosecute them!

So that gave me the Minotaurs, another chapter I love, well they're bronze aren't they! Some of the other chapters became excomunicate traitoris so I won't be including them but maybe a Fire Hawk and a Lamenter? A Son of Anteus could be made out of an Age of Sigmar Retributor, y'know cos they're that truescale size everyone's been banging on about and the Sons are 'big boned' afterall. He obviously won't be made from the Overkill box so I filled out some of the other chapters with Dark Angels and Space Wolves [cos I've got loads of bits] but also some other chpaters I like - Excoriators for their battered armour and visage. Carcharadons and Red Scorpions because they're pretty brutal - any loyal chapter that has a reputation for being potentially too violent or hard line to be trusted. Just fill the Deathwatch full of borderline loyalist heretics ;)

I even went so far as to think about the Soul Drinkers, because I love the fluff behind Sarpedon, but they're renegades so probably a bit too heretical to get in the Deathwatch. Although I'm pretty sure you could fluff-excuse any chapter in the fact they remained loyal while their brothers turned, much like Garviel Loken did. I'll also use the White Scar bike to make my Ravenwing Chaplain with some spare bits. He can cross represent both factions then - see, thinkings! 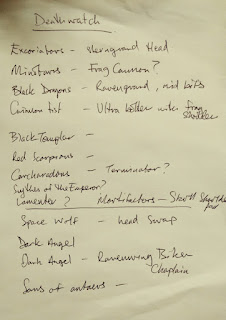 So this was the plan, I may well get round to it at some point, need to buy some bits and actually look at the Codex so they can at least be kitted out legally, if not competitively. Of course this grand plan could just join all those other grand plans like my scratchbuilt Caestus Assault Ram but at least there is a plan and should I find time, bits and the motivation to act on it, then here it is.