I have form with helping my kids with their homework... In the midst of my trying to motivate myself to do the Drop Pods I helped my youngest with his half term project. In the past I've made a model of a Neon atom and helped with the trees from a Savannah biome, each time I've probably done more than I should so why should making a Glyphis Shark be any different? So we start with a fabric softener bottle. 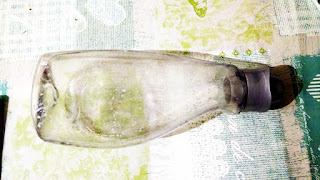 I then cut two arches out of cardboard and taped them onto the bottle. 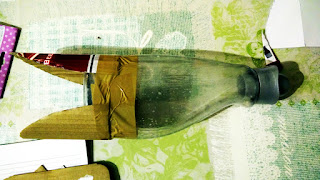 Two dorsal fins, with L shaped supprts either side to make them stand tall. 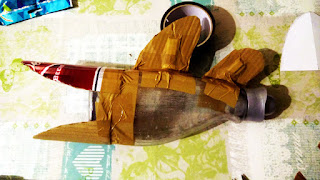 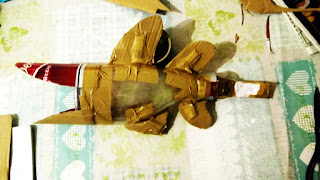 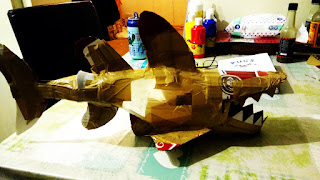 Papier mache - the wife took this as I helped cover the entire shark with kitchen roll soaked in PVA and water. The interesting thing was the paper towel had a spotty embosed texture that transferred perfectly, representing the rough sandstone texture of a shark. 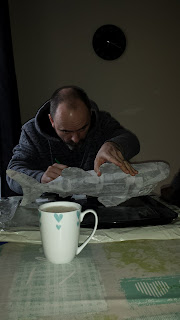 And here's the youngest once it was painted - grey primer, white primer, black poster paint for the gills and some googly eyes. 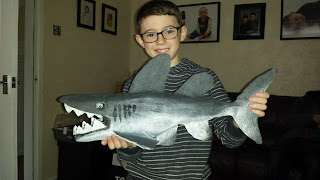 A bit of red oxide primer in the mouth, 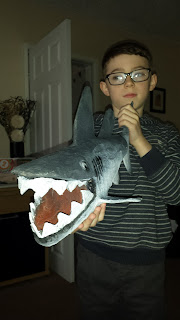 OK, I'm a bad Dad in just how much of a hand I had in this construction, but he did put half the papier mache on, painted the gills and helped with the spraying. I felt really guilty about it but I can;t help myself, he was clearly chuffed with the results though, I just hope he enjoyed making it together. Anyway, thoguht I;d share what you can make over a few hours with just a little bit of effort and a lot of brown sticky tape.
Posted by 40kaddict at 12:00