As is my want after the first Great Build success I was compelled to take the next step in the diversionary task from the drop pods and 'prime' the models. When I say prime that includes painting the bases too, obviously! Of course that has meant these are more special to me now and I kind of want to continue painting them but I must resist the urge. I undercoated them all black, applied a zenithal Angel Green Army Painter spray and then roughly masked the miniature with a sheet of card so I could hit the base with Red Oxide primer. I then did my usual Red Planet BASE recipe.

Just a couple of extra notes not covered in the previous build posts. Construction for these was about seven or eight hours, spread out over a few nights and a day I had off. That's the price for trying to make something unique out of disparate parts. You may also have noted they're on 32mm bases. Given the new way Marines are going and also the wobbly model proclivities of Assault Marines it made sense. I have concluded I may resize my Dark Angels at some point, I've only done about 25 afterall. I'll be looking at getting some base adapters down the line and upgrading them when I can but going forward they'll be 32mm. 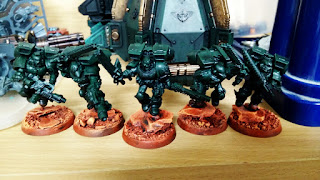 Whilst I was at it I thought  I may as well get the Patriarch and Terminators primed and base them. A little bit different here as 2/3of them needed some Bonewhite primer and the Librarian was good just being black as his terminator armour will be blue, although thinking as I write I suppose I could have done him Bonewhite to still be Deathwing and in a nod to the blue of Librarians done his tribal Markings blue... I can't unthinkable that now... Will it prevail? Who knows. 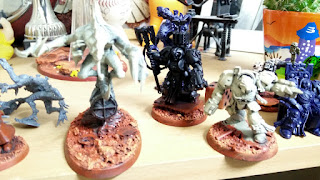 For the most part these can be parked. No doubt I'll probably throw on some base colours when I want to avoid the drop pods. For the Marines it'll be bronze effects next which I'll also apply to my Deathwatch, although there's will be untarnished bronze as they'll be less concerned with the blessings of the rains of Caliban as my Dark Angels are. In the mean time I get to award myself the first Big Purple and White Stamp of Approval.