Day two and I've managed to drop to the bottom table, what's even more shocking is my opponent Sandy Grant has brought Tau! It's not like he's even brought rubbish Tau with two Riptides, three Hammerheads and three Skyrays! How he's ended up on the bottom table is beyond me but I was pretty comfortable in the idea that I was going to lose this game, I mean I was going to try but that Wooden Spoon trophy was close.


The low down:
The forces of the greater good and the great devourer face each other. 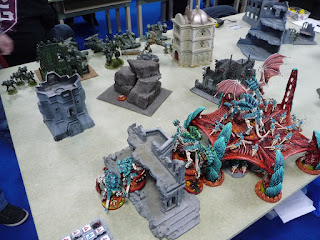 With some Kroot hiding in some ruins. 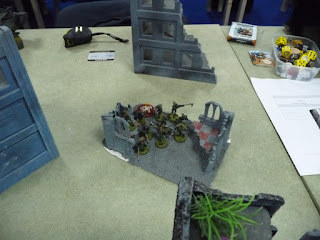 Sandy's first turn brought about a wound on the Tervigon, I think he also wounded the Tyrannofex as well but for the most part it was pretty ineffective. 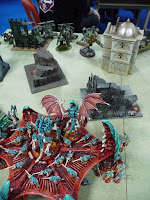 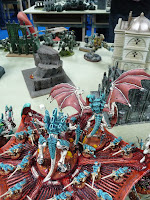 In response the swarm surged. 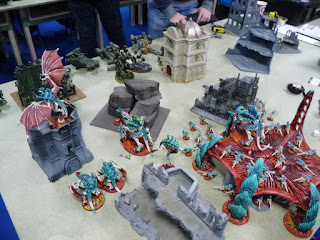 The Flyrant managed to take out a couple of battlesuits but despite the cover on top of the bastion he was wiped out by the combined fire from the Skyrays and marker lights ensuring he couldn't hide. He fell to first blood and slay the warlord. 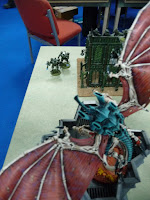 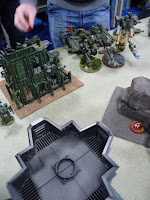 With the Tyant gone the Malanthrop continued to urge the Tyrannofex and Carnifex forward while the Tervigon remained protecting the Hive. 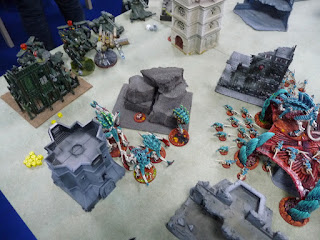 The Tfex must have killed another Battlesuit, I think his Acid Spray failed but the Stinger Salvo may have succeeded. 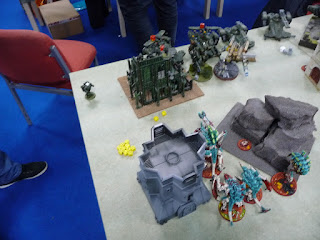 The Tyrannocyte landed in the ruins by the Kroot, with the Rippers disembarking to the first floor. Unfortunately only 1 or 2 Kroot fell to the Deathspitters on the spore pod. I knew I had a Maelstom card for objective 5 so killing the Kroot was a must to secure the objective. 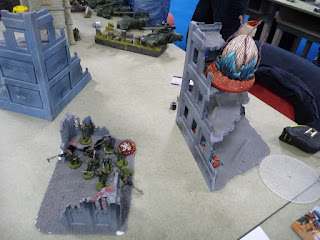 Having taken four wounds it didn't require much for Sandy to finish the Tyrannofex off. 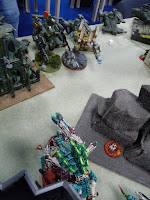 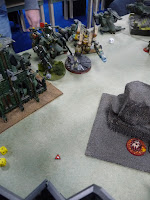 For no other reason than the fact I'd struggled tofind somewhere to Infiltrate the Stealers I'd decided to Outflank them, this turn they cam on, rolling the left flank but would they survive to impact the game. 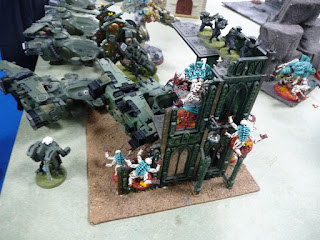 This would certainly help, my last Carnifex managed a 9" charge into the Skyray squadron. 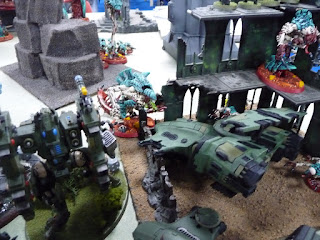 Blowing it up, I think killing a stealer in the process. 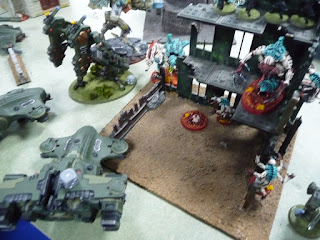 The Riptides seemed to be doing more damage to themselves, overcharging, than I was but still managed to get three wounds on the Carnifex. 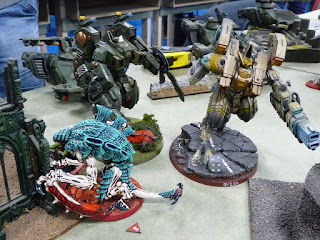 The Malanthrope was targetted with marker lights, stripping his cover and leaving him easy prey. The spawned gaunts are still in Synapse range of the Tervigon so at least they're not stuck with Instinctive Beahviour next turn. 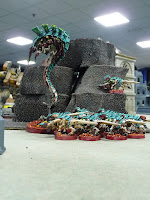 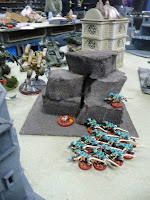 I now have a quandry, I have the Riptides, Skyrays and the Battlesuit Commander left and my Broodlord and a Genestealer to assault. For some reason I think the Riptides are the best option, the Skyrays won't have them locked in combat and the Battlesuit will die and they'll be exposed again. All I need are some rends and I could take one or even both of them down 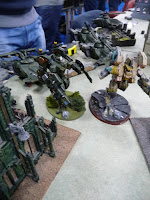 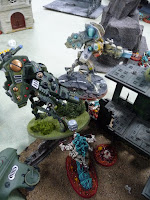 All I get is one wound on them. 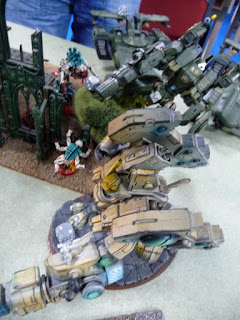 I then decide to conga line the big brood of gaunts while moving the spawned gaunts up to swamp the Riptides, although I think I must have failed their charge move 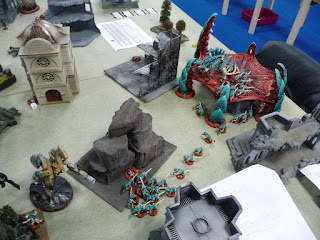 The Rippers pass their IB test [or fail and eat themselves] I still have a Maelstrom objective 5 but I also have a Maelstrom Card that gives me a point for Linebreaker this turn. So I realise I can get Secondary Mission Linebreaker and Maelstrom Linerbeaker for 2 points by ignoring Objective 5 for 1. The Tyrrannocyte meanwhile heads for the objective, but I think it was too far away to claim it. It does however cause the Kroot to break and run. 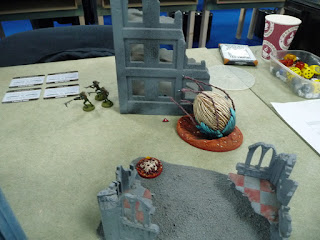 However, it draws the wrath of the Hammerheads. 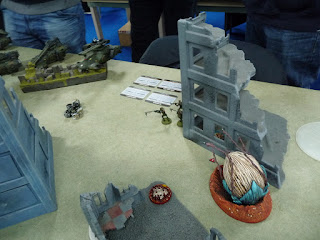 Who blast it into smithereens. 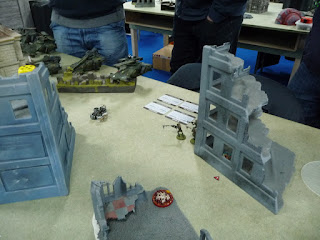 Big brood of Gaunts manage to get into combat with the Riptides, the spawned gaunts must have been killed, probably by the Skyrays who are about the only thing left not in combat. 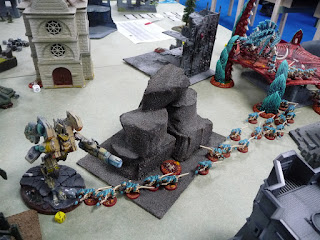 The Broodlord manages to get a couple of wounds on the Riptide but somehow manages to evade all it's return attacks. 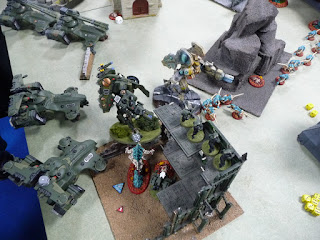 Another round of combat and the Broodlord survives yet again, the Riptides just do not have the Weapon Skill to hit it. Sandy and I go to divvy up the scores and somehow I've won, thanks to controlling both Eternal War objectives. The Tervigon on the Skyshiled is sat above mine and the ObSec Broodlord controls Sandy's.

This is the face of a guy who has just had victory snatched from him thanks to an inability to remove one wound from a Broodlord. I have to say this was an awesome game, I think there was a level of incredulity about just how unlucky the Tau were for Sandy. I mean he did a good job killing a lot of my army but it was just that last squabble over his objective that swung it. But that was down to a series of unpredictable events - the random choice of outflanking, the random target of the Riptides and the sheer inability to hit the damn thing in combat. By rights that Broodlord should have been dead but instead it won me the game. 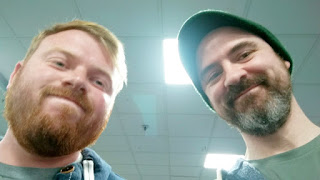 So I was going up a table and Sandy was looking towards the Wooden Spoon trophy.