Another unexpected beneficiary of the 'drop pod doldrums' was that I'd been contemplating my lack of progress on 'The Great Build' - my hobby season pledge to get more figures built, based, primed and the bases painted. With the pods proving difficult I looked to the bits of figures I had and what I could build and chose the Assault squad that had been sat in a little round turquoise box for over a year. I'd sourced some Sanguinary guard legs on ebay last year. The seller had loads of bits including some Blood Angel chainswords. I loved the slightly ornate nature of the legs, especially the quartered knee pads because they were perfect for my 5th company heraldry. 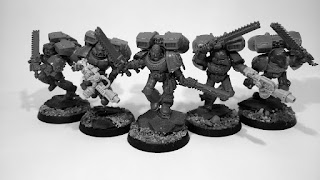 I wanted a diverse mix of torsos and helmets, a unique unit of dynamic looking characters. Assault marines aren't great by any stretch so I felt it was very important to just make them look cool so their innate awesomeness was reason alone to pick them 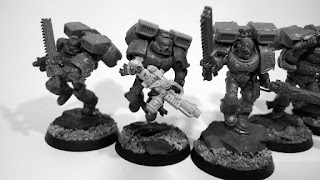 I also made the bold choice of giving them two Flamers. It's a cheap upgrade and I had the Forgeworld ones from when I got the MK1 missile launchers for my Devastator squad. I'm not sure anyone else would use them but for 10 points for the two they might put a dint in some low armoured horde army and the 2D3 overwatch shots are handy in a pinch. 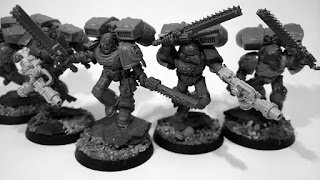 This is the Sergeant, which I've swapped his Bolt Pistol for a second Chainsword, bonkers I know. I've effectively removed his overwatch and ranged capabilities but I was desperate to have a figure wielding two weapons. The plan was to do it 'nito style' with a smaller combat blade 'shielding' in the left hand low down with the Chainsword raised up high. Sadly I couldn't manage the pose but this did OK and I was happy with the bare Ravenwing command head too. I also added some Dark Angel veteran upgrade bits to hide Blood Angel elements that were cut off. I've since also added some grenades to his right hip. I preferred the silhouette of the model without but felt it would make a helpful reminder he can at least throw some grenades in overwatch, he's not totally ranged free [or free ranged?]. 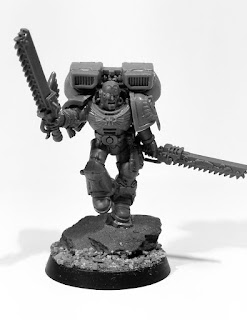 Another decision I may live to regret is that the Sergeant, this model and the next were not pinned to the slate rock, just super glued... still, I was pretty chuffed with this pose, twisting at the waist to give it more dynamism. The Dark Angel upgrade head was particularly cool with it's tall arched mouthpiece. 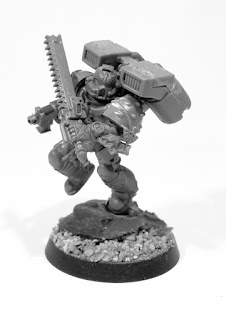 Slightly less convinced about this pose, the drum feed bolt pistol is pretty cool alongside the Ravewning upgrade beaky helmet but the pose is a bit more 'falling down' than 'strike from upon high'. I tried to attach a little Dark Angel toke on the end of the chainsword but it pinged off in the shed - forever lost. I did put some elements on his right hip to hide some Blood Angel motif that was removed. 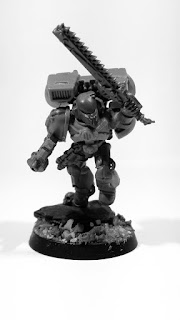 The flamer was really quite difficult to pose, I had a load of second edition arms but it was still a struggle to get it to look right. Luckily that purity seal helps cover up how weedy the right arm is. The left arm is a Space Wolf arm PeteB gave me ages ago in an effort to empty his bits box. I thought it'd luck cool, but more importantly it'd reach the flamer handle. I used some flower arranging wire to lift the model up I could have used clear acrylic rod but with the painting I thought I'd still get it messed up and a simple black rod can be just as effective. 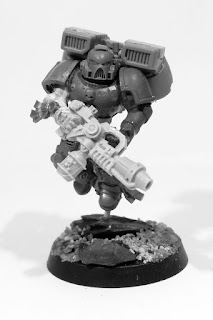 I suddenly realised with this guy it's the Bolt Pistol that's replace not the Chainsword. It was too late to add one to the previous model but I had to ensure this one carried both hopefully to remind me they all have the melee weapons. Pretty happy with the pose, all the squad have the DA upgrade shoulder pad with a sword blade on the right shoulder. Not really chapter approved but for some reason it had to be that side, I'll justify it with fluff somehow ;) 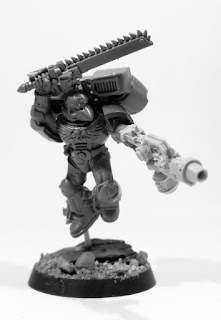 Whilst I was basing the squad I decided to base these two Terminators from Space Hulk that I was lucky enough to have thrown into the copy I got off ebay that wasn't supposed to have any of the Terminators included. The standard sharp sand mix I use was supplemented by some grit that I won as part of my 2nd place Best Army winnings. It's just smaller than my main pieces and bigger than the fine sand. Hopefully it should be more interesting now. 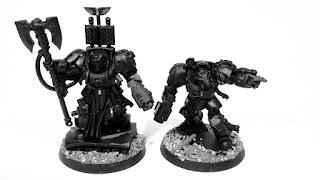 Lastly I based the Genestealer Patriarch too. 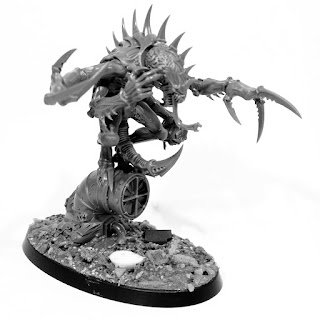 Lots more elements from my rubble mix with bits of sprue, larger stones, card off cuts and bits of plastic so they fit my slightly more urban resin bases.

After all that I get a Big Purple Great Build Stamp of Approval for the Assault Squad...

and another two for the Patriarch and Terminators.