NOTE: For reasons I cannot fathom, all the pics have been deleted from Google photos and a recent image purge on my phone [maybe thats the connection] has resulted in their removal. I've found some lo-res cached copeis but I'll try and find the hi res versions, in the mean time I appreciate this doesn't look good and sorry for the cock up.
UPDATE: Found I'd set an automated sync to a cloud storage site I'd forgotten about and managed to reupload the hires versions...

I'm not sure if I was otherwise affected by Rory Priest's last comment on the drop pods:

"I do think they should really be approached in ones from what I have heard/read."

But as it was I did stall for a while on this, it's odd really as the process is highly predictable and although I can't say I feel the need to gnaw my own face off as I would a dozen Genestealers there is something emotionally null about it. I don't dread it or fear it but it just fills me with no pleasure whatsoever as I finish shading the inner parts of the fins. 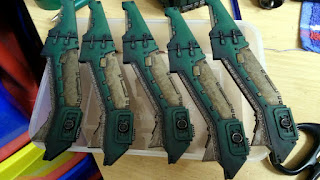 The other sides have also been done but I now need to find a way to blend the colours, the highlight is too olive looking. Usually I use my Dark Angel green Valejo paint, if it's not shaken it has a semi-opaque glaze quality that will help blend the stippled highlights and enrich the darker greens. I'm a little hesitant though as I fear it may obscure the black shading, part of me wants to get the Citadel Green Glaze to achieve the same result and be more consistent so I'm waiting for my next opportunity to get some.

In the mean time I went on to highlight the doors. The stippling is not looking great at this stage. From experience I would have applied the £1 craft acrylic to simulate a rougher cast surface that would have meant my stippling would pick up the extra detail and not need to be so perfect, like my Imperial Knights. 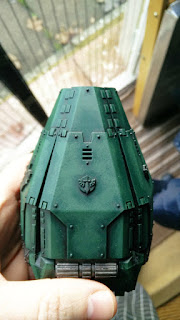 Unfortunately this had already progressed so far I didn't want to go back to such an early stage and with the knights they had another coat of spray over the top to try to seal the art paint onto the model. Now I had to decide about the black shading on the doors and how to apply it. Then I'll be at the same crossroads as the fins for blending the greens.

Therefore with decisions to be made I moved onto pod number 2. Hopefully while I focus elsewhere a decision can percolate in the back of my mind while my efforts are more productive elsewhere. So I move onto the bronze, can I recreate the success of the original? 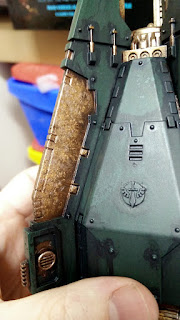 I manage to get the Gehenna Gold and Brass Scorpion on. The stippling is a bit more chunky than pod 1, less realistic but I don't think it's any worse for it. I've some sepia washes to do next to deepen the tones and then I can work on the greens and sync pod 1 and 2 together in the process.

This was a long slog to get here but I did flip between a number of projects, projects that I don;t want to be working on as the pods are the primary goal; but they're all on the list I just don't want to get sidetracked from the next thing I have planned after the pods. I fear I may get too attached to the things I'm doing to keep my mojo up and not get back to the next big thing I'm hoping to do. That said I'll still be sharing the supplementary efforts over the next few days, lots of exciting things after a period of seeming inactivity.
Posted by 40kaddict at 12:00