Here's all the Space Crusade bits I sold on ebay a few years ago. Now I say I don't regret selling them and that's true, I was never impressed with the plastics. The new Space Marine helemts that had replace beakies were really cool but this fersion just made them stunted and tiny. The Space Marine Captain was cool in a cuddly sort of way but it's no great loss. Even the heavy weapons bounty wasn't up to much. You could remove some of the hands to convert to current figures but it's still a lot of faffing.
The only other note is the Dark Angel green undercoat I used on the yellow figures, as you can tell from the one lying down. It wasn't too glossy a finish but the car spray paint went on beautifully, even better than some of the usual undercoats and this was just the usual top coat layer. I'd love to be able to see what I could do with one now, if a Badab Black wash would just tone done the little bit of shine, I'm sure these would be perfect Angels! 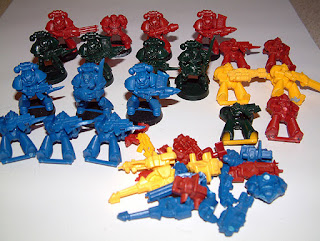 Rogue Trader dreadnought, move on, not interested at all. I was probably going to go with a Deathwing effect in the painting but obviously never got past this. I was never a huge fan of the model, and I'm not much of a fan about the new Sarcophagus dreads, although the Venerable ones are cool and the new Forgeworld Contemptor pattern dreadnought doesn't strike any cords with me either. However I did like the old schematics showing how a Dreadnought works and Ron From the Warp has a picture of the very same plans I recall with such fondness. 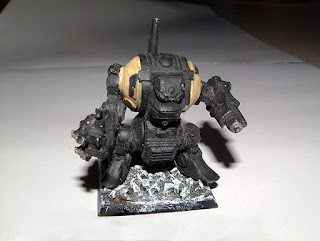