I may be about to commit an unforgivable faux pas or not. Have I shown these already? For the life of me I can't tell but I can't seem to find them in my searches and I have another update to follow so thought I'd better just guarantee they were out there to prove I have made some advances. So the Tac squad had a basecoat of Orkhide Shade. I can't quite recall if this was at that point or after I'd done a Dark Angel Green drybrush. Now I say drybrush but the way I put it on it was more like a 'drybuff'! Everywhere it went seemed to get 'polished' so I haven't ended up with the usual dusty look most drybrushing results in. 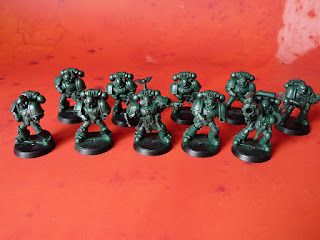 Following on from this, though I have no pictures, I did a Badab Black wash and it removed any shiny quality and really started to generate that 'dark' in the Dark Angels. Not that I'll probably ever use this Space marine Captain but he's going to get painted up in the process. 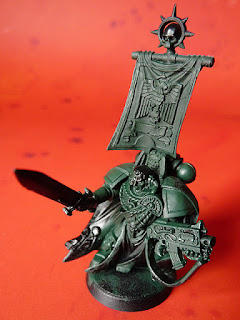 The big deal, once I've resolved the DAGreen will be all the other bits . Had wanted a white edge round the the shoulder pads, leading up to the Tac Squad Arrow, but that isn't 'Chapter Approved' and may well end up being less dark than I wish. I'm thinking of going aged gold on the chest Aquila, sommething that can be toned down. I'm looking for whatever aged metals I can get, no shiny polished metal for these guys. 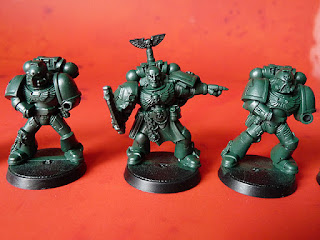 I also have to decide on which company. However as I have some of the Information from Imperial Armour 2 which details the Siege of Vraks I can choose from the 1st and 2nd [obviously] but also the 3rd, 5th, 6th, 8th and 9th companies. However, they do feature combat squad Boreas, which is 10 men so why not appropriate these guys and my Deathwing can also be Squad Arbalan, so I kind of know who each of these Marines is. Of course one of the real reasons for doing this is the Vraks Devastation force also included 12 Tarantual Sentry guns, so it's always a reason for keeping them included in my army. 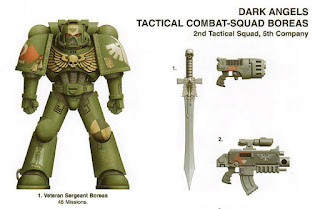 Another shot of the Captain, subtly different but still worthy of showing nontheless. 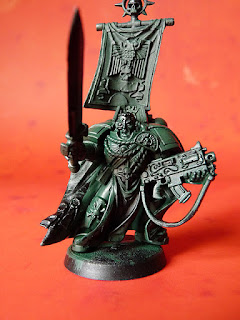