Following on from my feeling of lethargy on Wednesday I feel like I've started to break free from that 'swamp'. Admittedly the progress isn't massive, under close scrutiny, but somehow I feel like I'm getting somewhere. As I commented in that thread I actually went on to listen to Helion Rain and did the 50:50 Bonewhite/white highlight on the Terminators. Drilled out the storm bolters and added Mechrite red to all the bits that needed it. I haven't yet taken pictures, not sure if the level of highlights will even show up, which doesn't sound like progress but I assure you it is.

Anyway, on Friday night the wife had another night shift so I decided to crack on with a number of other things. I'd prepped a new 'man-made hill' and decided you all needed to share in it's inception. This hill is obviously a lot simpler than the previous Vulcan Plateau - a simple square, but the final STC will in fact have extra bits that will allow you to construct your hill in a number of patterns. Sharp eyed amongst you will notice that the cladding pieces on the side don't go as close to the corners as usual. This is so you can add corner bulkheads similar to those used on the 40k Outpost that got bigger. Alternatively you can leave them off. 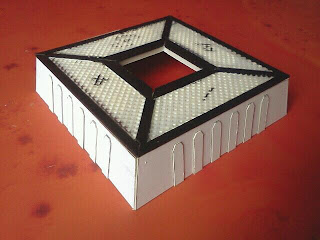 A third option will involve steps. As it is, these are hills and unless you run the rules that hills are difficult terrain there shouldn't be any reason to sculpt steps onto them, to allow figures to get topside. I don't make them in my foam hills so there's really no need, but with these they sometimes make sense. This particular version will just have one set for reasons that will become clear but equally you could do a set of steps on each side which I think would look quite cool. Of course you could mix and match any of these options for a multitude of hill types but the three options described seems like a nice starting point. 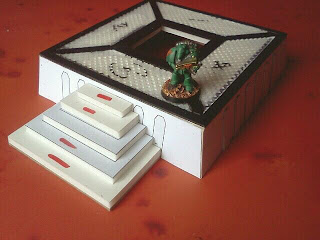 And obviously the modular plug aspect allows you to add in the Vent Tower components. Don't worry I have realised I will have to expand the number of models featuring the modular socket. I have one immediate plan to 'fill that slot'. It's a new addition to my 'to do list' that will remain a secret for the time being but I will be prepping some CD bases with modular sockets so the items can be used on the current man made hills or just as normal terrain. 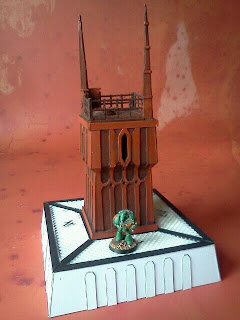 Here's why I needed the stairs, the Vent Tower just wouldn't have sat right with no immediate access to lead you in to those big old doors. So I've managed to add even more height to the tower which is fun, G.O.D. help anyone with a 12" range, you can shoot anyone assaulting the base, that's it. It's a total real-estate thief but it's looking awesome. 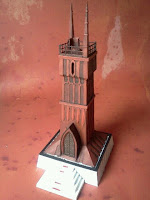 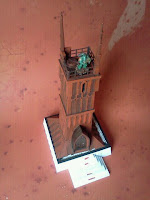