While I'm doing the AoBR tactical squad I'm also painting a couple of other figures. I'm deluding myself into thinking these are test pieces but as I'm doing them at the same time as a squad of 10 how am I supposed to implement what I learn from these on the on the full squad? We've got an original lead [pb] Rogue Trader Marine with his overly square bolter, tiny legs, cloven toed boots, Mad Max hair and an eye-patch. I used Milliput to creat a respirator mask [back in the day], it's not great but it's better than the sculpt on the face that was there. Sadly because of his tiny legs he looks a bit puny now despite something menacing about him, he looks 'bad-ass' but next to the AoBR figures he ends up a bit wimpy. 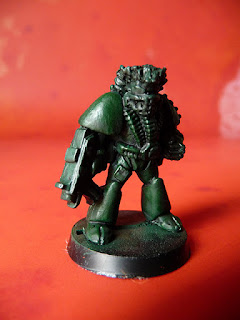 Advanced Space Crusade Scout. You know I've got loads of these, I don't think I'm ever going to have more than one squad and I've got a set of five that I've taken the Mohican off. Although it fits the Deathwing Native American motif I think it's a bit rubbish. Saying that having one to mix in may add a bit of spice to the otherwise dull pose of the Advanced Space Crusade Scout. Of course the lollipop stick bolt pistol cowling had to be done. It's now a bigger muzzle than your standard Marine issue bolter! 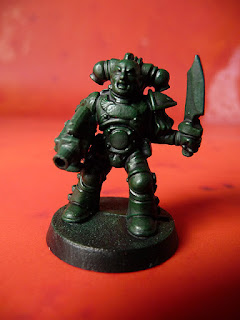 And here's one of the White Dwarf freebies, a flamer marine to go with the Missile Launcher Marine I also got free. Nothing much to say on this guy but as flamers have such a devestating effect on Termagants I'm happy I have him even if there's still no real pay-off during battle with this weapon yet. One day he may very well come into his own... 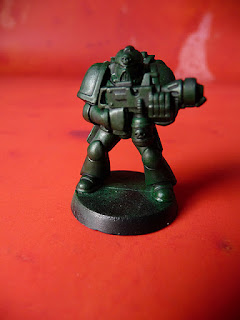