It's been quite a while since I made any effort on my son's Mycetic Spore. I've still got two Plasma Hatchers which I think are awesome and all those haters off them need to get a grip. A few quid for a perfectly acceptable model of the correct scale for a unit type not currently made by GW. Seriously, everyone should be using them. But I'd already started with my idea below and I made a bit of progress over the weekend on the base. 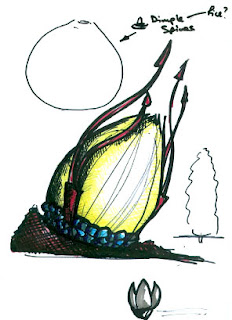 The base was just a piece of hardboard cut to the same shape as the Trygon base. I used layers of the black styrene foam used in Pizza trays [FYI: that stuff is cool for carving and doesn't melt as much under spraying]. I carved it to the desired shape as per my sketch. I then got some DAS air drying clay and sculpted the crater. It struggles to 'stick' to the underlying structure [which I'd read about on http://www.terragenesis.co.uk/] but a bit of pressure and some water to smooth everything over helps. I used a tiny pine cone to roll some texture into the clay, but will probably add sand to it as well. I sculpted some gouges with a coffee stirrer. It could be better but as it's another job that's been long in procrastination the limited progress is greater than the actual sum of it's parts.﻿ 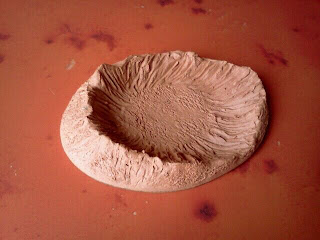 Here's a reminder the pot-pourri 'thing' I'm using. I've cut some bits of card to use as the Chitinous parts. I may not go the tiny plates route and go with four or five large plates. Card base with either DAS clay or Milliput to sculpt the correct shape - that's the next sticking point. The base needs a hole drilled into it and the Spore will be screwed onto it to stay solid. 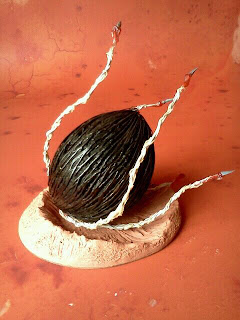