Nearly at the end of my Smurfs coverage and these are a little interesting because of the odd lead (PB in the Periodic Table) Epic miniatures. First up my Ultramarine Terminators. They look so cool in squads of 5 but I was missing one so co-opted a lead Space Marine with Power Fist, he's nearly the same size and actually looks like some form of Terminator Captain. 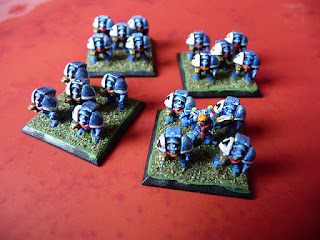 Mole Mortars, another useful little cheap artillery unit. In this case the lead figures are massive, surely the largest Space Marines in existence! Look at the size of the fella compared to the standard plastic marine. 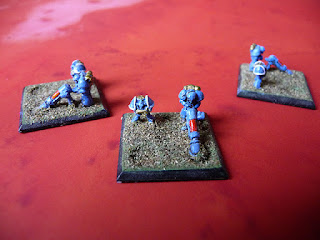 Here's an unfinished Devastator squad. Again I used accent colours on backpacks and weapons to differentiate the units. These were obviously the red label [gold and silver being the alternates] I really dig the white missile launchers. Humbrol Matt Whit Acrylic had gorgeous flat opacity and it was really easy to apply. I also had quite a few technical drawing pens at the time so you can see the yellow shoulder pads have all been outlined in Black, something I'd try more often for different things in the future. 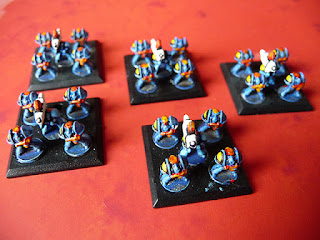 Thanks for sticking with this 'Epic' Ultramarine memory lane, there's one more post with some group shots of everything to come and then I'll pick up on my remaining unfinished Titans and that'll probably be the end of my Epic journey.
Posted by 40kaddict at 15:13