eBay sales I may regret

Here we have one of my eBay sales that with hindsight I may regret. These are some of the Close Combat Terminators. As you can see they're a little more bulky than your average Termie because they got into the rough stuff, also a Cyclone Terminator and some figures from the original box set though I note the Assault Cannon isn't present. Back row you have a TH+SS in Deathwing colours. A Cyclone Terminator which I got from a friend, he also has a chainfist at his feet. Next is another TH+SS in Deathwing colours, I think I used a yellow base with a thinned chaos black for these. All these bonwhite colours where mixed on the fly, no ready mix paint and highlights back then for me! Then we have a captain with the original power fist/combi-grenade launcher and lastly the Lightning Claw Terminator [the other pair of lightning claws I got went on the Librarian Terminator I'll be using as Belial and realise now I've never included a shot of him here...]

On the front row is a standard Terminator but with TH+SS armament. This guy was undercoated in a satin Racing Green Car spray that had really good coverage and was spot on for Dark Angels green but I don't think I ever got passed that undercoat on any of the figures I primed with it, which is a shame. Then we have a standard Terminator with Storm Bolter and no left hand and lastly a set of TH+SS with what looks like one of those tiny Heraldry shields you used to stick on and still come molded to the Black Reach Terminators. 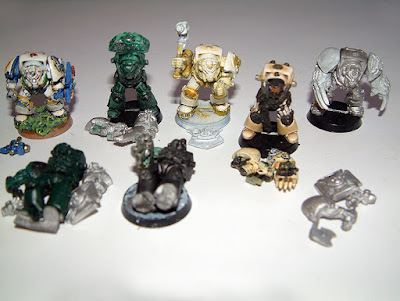 Some of these I do regret, the CC Terminators are really tough looking and would stand with the slightly bigger plastic variety now, in particular the lightning claw one looks awesome. I'm certainly short of a few bits of armament for my remaining lead [pb] Terminators. The painting on the Captain also looks really good [considering I had no bonewhite colour] and I'm sure I'd have been able to bring him into my existing line up. The Cyclone is also something I may play around with in my list﻿.
What can you do though? I'm sure I got a good few quid for them and at the time I got a digital camera with the proceeds so I can't complain, despite it having broken since then. So I debate getting rid of anything 'surplus' at the moment which is tough because I have some figures I'm just not sure I need anymore...
Posted by 40kaddict at 12:42