Terrain is everything - 40k Ruins.

I've already shown a ruin off in a previous post. I didn't really need a sketch for these, I'd already got the Illustrator files to retain consistency in the shapes used. As I was hoping to use bits cut out from the extra cereal box reinforcement this would speed things up and keep the aesthetic going, oh it was recycling too, it's nice to be green!

However, my plan did involve creating two panels, joining them in a corner, then 'ruining' it so that I could create another corner piece with the bits cut off. That way doubling up on my terrain and allowing the corner pieces to be stretched to create as large or small a ruins as I wished.

These were my first attempts at battle damage which initially is heartbraking but then quite rewarding, didn't know if I could bring myself to do the same on the hex platforms... but I managed it. 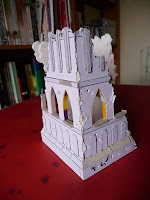 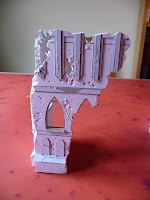 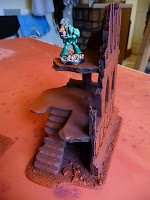 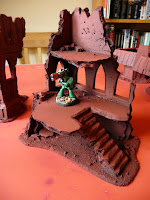 I've prepared a .pdf template for this in case you want to try one. I've another template to prep for a smaller ruin, I'll get onto that as soon as I can.
Posted by 40kaddict at 13:24