So here's the Prime with his Deathspitter in place. G.O.D. that was a nightmare. Like many my workspace is a little, how should we put it? Like a Landfill! Trying to find that Deathspitter was like a needle in a haystack. Actually the weapon was fine it was the left arm attachment which was missing. Looked high and low, tried Termagant arms in replacement - too small and even considered buying one on ebay. In the end I found it because it was no longer what I was looking for, insomuch as I had already cut the forearm off just leaving the bicep and the pipe. The forearm was being used in my Doom of Malantai conversion, as it's neck! More on that another time.

Getting back to the missing forearm, I ended up using that Termagant Fleshborer arm, chopped down and glued to the stump and pipe. The advantage is it was now double-jointed, 2 elbows and gave plenty of clearance round the chest plate [something the Termgant arm alone couldn't do and looked puny] now it's better than if it was the Warrior arm alone. 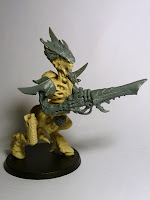 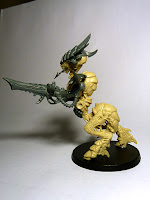 You can also see I've added a tongue [it's snapped off once already and yet our current Prime remains undamaged, touch wood!] Lash Whip was added, more PVA coated string to add musculature to the whip and a Trygon spine was heat-welded to the paper clip. The Bonesword was added without hassle. 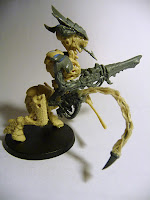 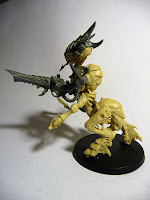 So there you have it, I'll probably do some painting shots for kicks, it's content for the blog at least. This is a really easy conversion to do, the hardest part was probably the Lash Whip but nothing anyone wouldn't be able to achieve. It can be done in a couple of hours really. I actually thought of getting another Original Warrior to do a Prime to sell on ebay, hopefully funding another box of Warriors which I'd have to decide on bulking up the existing squad or finally tackling the Shrikes...

Meanwhile this full-frontal shot shows you why the gun's up top - to shoot over any intervening terrain/models and the combat weapons are at Human height, where it needs to be. 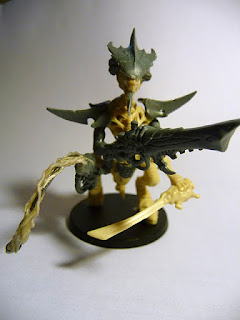