Don't be frightened, you are still at Confessions of a 40k addict [I still can't believe I got 40kaddict.blogspot.com] but things are going to get slightly more fantasy around here as I showcase some of my old Warhammer Fantasy Battle figures. To ease you in gently [as a lot of people were to Games Workshop] here's the Heroes from Heroquest the much loved, by some, boardgame GW did with MB Games.
I don't know how I ended up with them but I did paint them up to be used with my Empire army [I forget which city state this Conan Wannabe with a floppy sword is from - ahh Nordland, just found my Empire book] but I also painted a few of the baddies so I know we were actually playing the game at the time, although not quite as seriously as when it first came out.
BTW that flesh colour is a Matt Humbrol Acrylic, another super opaque colour I loved. Sure it looks straight out of a cartoon but flesh paints had always been a nightmare for me right back to the Humbrol Enamel Flesh colour tin that opened while I shook it covering a brand new black jumper which never saw the light of day again for fear my mother hit the roof! 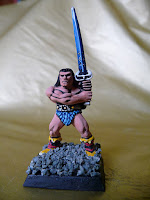 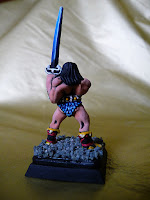 Next up an Ice Wizard! Ice magic was cool, I'll scan the magic card from my Empire book and revisit this guy and his Kislevite comrades. I still like this guy, there's some subtle techniques [I think] that still work. Epic IG decals on the legs and cloak, lightning bolts but they look sufficiently frost like. Some light frosting on his fingers, an attempt to make his Wizards staff like an icicle and semi-transparent [I think I nearly pull it off too] and some 5 o'clock shadow! Sure the cloaks highlights are too extreme but I love this guy. 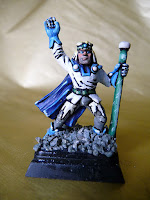 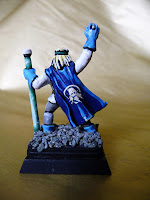 The Dwarf, not much to say about this fella but these highlighting techniques, exaggerated though they are were all preparing me for the Empire Army to come, something I was happy with, garish and cartoony but painted and tabletop ready. You'll also note the model railway ballast I've been harping on about. Sure it's not awesome but it isn't bad either, it's quick and it's natural and if you can't base figures I think it's a solution. 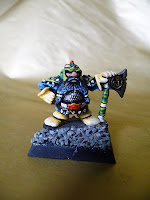 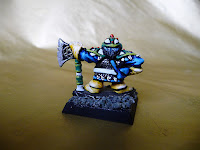 Here's the elf but I went another way with him. I'm not sure but I think in Dungeons and Dragons this would be a Drow, their equivalent of a Dark Elf. To be honest, despite it's prevalence I never played D&D, watched the cartoon series of course but the first time I ever saw a Drow it was at the Gathering, the largest live role-playing event in the UK and that was well into, if not coming to the end of my gaming history [until last year]. Anyway, it was a fun bit of painting and even though wildly different to the other three fits in well. 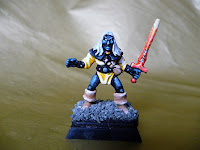 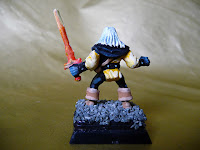 Yes, it does fit in well doesn't it as you can see below - The Heroes of Heroquest. 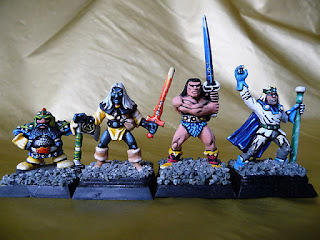