Afternoon #warmongers and #warhammercommunity I've been #paintingwarhammer on my Tyranid Tyrannofex. I took a week's leave around this time and had promised to paint the kitchen. It's been needing it since I painted the back room, which was another project that was delayed year's after I vacated it, hobby-wise, into the man-cave. Lets just say it was overdue and over 4 days days I got everything painted - 4 thick coats on the walls, all the wood work fixed some cracks and other general wear and tear. Hobby wasn't particularly high on the agenda, certainly not when my back had gone on day one. Luckily the effort helped it strengthen over the days rather than make it worse. But I found time to put some base coats on the Tfex It's not actually stuck to the base so I was able to get underneath for all the bone and chitin. I then added the first sepia shadow wash, with a strong tone wash to follow. 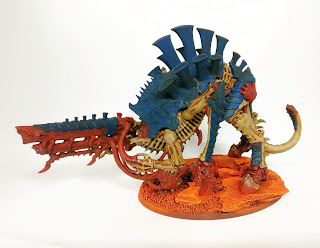 The head was also brought up to speed and with a little more effort it'll slot in alongside the numerous spare Carnifex heads I've also had on the go. 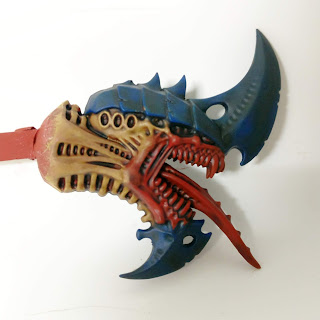 It's pretty much just an oversized Carnifex head afterall. 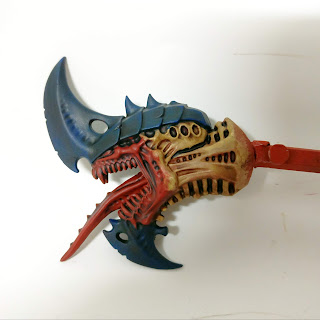 So the Tfex is now in the same state as the rest of the Tyranids I got primed - the Hive Guard conversions, the Warrior and the DevGaunts [although they've had some highlights]. More floating projects I'll dip into, or use to avoid, when I'm stuck on something else [Lnnd Raider Redeemer].
Posted by 40kaddict at 12:06